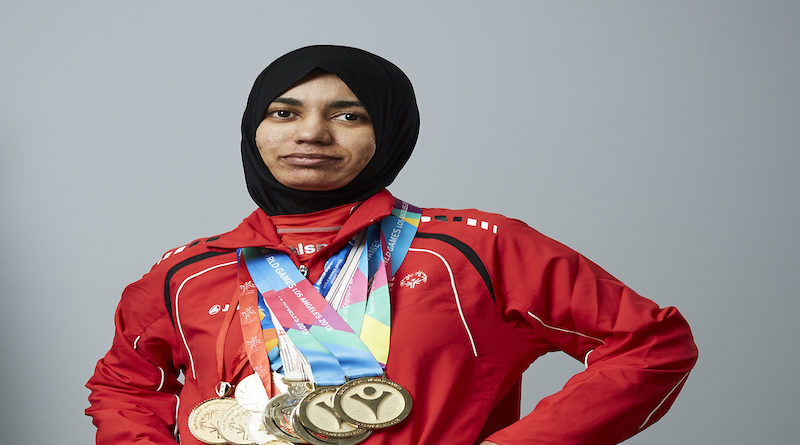 March 17th, 2019, Abu Dhabi (UAE): The UAE’s Hamda Al Hosani will have to make room for another medal in her cabinet after winning gold in the 200m final at Special Olympics World Games.

At Dubai Police Stadium today, the 30-year-old sprinter crossed the finish line in an impressive time of 32.14 seconds. Canada’s Eva Bell who crossed the line at 34.81 seconds closely followed her.

There was more reason to celebrate for the UAE, with Hamda’s fellow Special Olympics UAE sprinter, Momena Shirdal, coming in third (36.42) during the same race and winning bronze.

The result comes as no surprise, with Hamda having dominated the track at various Special Olympic events. The Emirati sprinter, who is known for having more medals than Usain Bolt, has more than 15 medals to her name.

Hamda, who will compete in the 100m later in the week, said: “It is a great feeling to win gold on home soil and in front of my home fans. I’m really enjoying the World Games so far. It has been really fun and the other competitors from around the world have spoken so positively about the competition, which is really good. I cannot wait to get on the track again this week.”

Those interested in watching the athletes compete in 24 Olympic-style sports can visit www.meetthedetermined.com where registration is open for all Games-time dates and venues.

Under the patronage of His Highness Sheikh Mohamed Bin Zayed Al Nahyan, the Crown Prince of Abu Dhabi and Deputy Supreme Commander of the UAE’s Armed Forces, Special Olympics World Games Abu Dhabi 2019 is an integral part of local, national and regional plans to expand opportunities for people of determination in line with Abu Dhabi and the UAE’s shared vision of a unified and inclusive society.

Special Olympics World Games Abu Dhabi will be the largest sports and humanitarian event in the world in 2019. From 14 – 21 March, over 7,500 athletes and 3,000 coaches, representing 200 nations, will be in Abu Dhabi and Dubai for the World Games.‫

The first ever Special Olympics World Games to be held in the Middle East and North Africa will also be the most unified Games in the 50-year history of the Special Olympics movement, with inclusion of people of determination with intellectual disabilities in every aspect of the event.