Home to more than 82 different nationalities, ADU aims to spread a culture of tolerance and inclusivity in line with the Year of Tolerance. 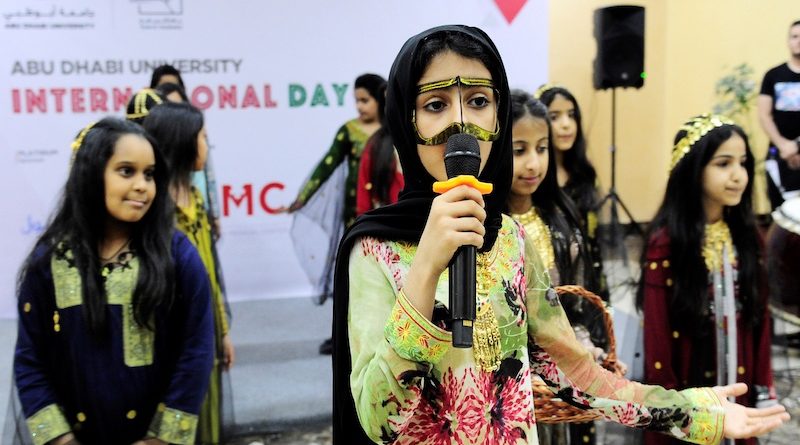 March 24th, 2019, Abu Dhabi (UAE): As part of its efforts to spread a culture of tolerance and inclusivity in line with the Year of Tolerance, Abu Dhabi University (ADU) hosted an International Day for the ADU community to celebrate diversity and promote exchange and understanding between different nationalities.

With more than 14 different countries joining the celebrations, the event featured a mix of eclectic culinary traditions, cultural performances infused with folk music and traditional dress, as well as an array of internationally themed booths. A renowned Emirati-Japanese Kharsha Drums group performed at the event and captivated audiences with a unique fusion performance that combined elements from the Emirati and Japanese cultures in a distinctive musical expression.

Professor Waqar Ahmad, ADU’s Chancellor, commented, “We strive to follow into the footsteps of our wise leadership who have firmly established the UAE as a promoter of peace and symbol of tolerance, the enduring value of this year’s theme. At ADU, we are proud to be home to over 82 different nationalities who live harmoniously in our rich and culturally diverse environment. This initiative aims to promote a dialogue between cultures and engage the ADU community in learning more about other traditions and values to expand their knowledge of the world in line with the Year of Tolerance.”

The event saw the participation of faculty and staff in addition to Alliance Française (AF), an international organization that promotes French language and culture around the world.

The festivities included themed booths showcasing a striking mix of cultures from India, Palestine, Syria, Jordan, Lebanon, Ireland, UAE, Japan, Sudan, Philippines, Korea, Egypt, China, and France. During the festival, four awards were presented to faculty members and their affiliated booths in different categories including ‘best dressed’, ‘best cultural dish’, ‘best decorated booth’ and ‘best dance performance’. This initiative is one of many planned this year to celebrate the Year of Tolerance.

The university currently has more than 7,600 students across its bachelor’s, diploma, master’s and PhD programs at its campuses in Abu Dhabi, Dubai, Al Dhafra and Al Ain. Students at ADU represent over 82 different nationalities enrolled in 44 academic programs, all of which enjoy global academic accreditation. The growing multi-cultural student base is divided into 29 undergraduate and 15 postgraduate programs, with over 15,000 graduates working in the UAE and abroad.

Abu Dhabi University is a private, multi-campus University committed to meeting the education, skills and knowledge needs in the United Arab Emirates and neighboring countries through qualifications and standards that are respectedacross the world.

According to the QS World Universities Rankings, ADU ranks in the top 701-750 universities worldwide, the top 150 leading institutions under 50 years, the top 27 universities in the Arab World, and the top 6 in the UAE. Being rated 3rd globally for international faculty and 10th for international students, we consider diversity to be among our key strengths.

Established in 2003, Abu Dhabi University has over 7,500 students from over 80 nationalities across its four campuses and sponsored programs. Structured into Colleges of Arts and Sciences, Business, Engineering, Law and the University College, we offer undergraduate and graduate programs across arts, law, education, business and management, engineering and sciences, including to Etihad pilots, trainees and personnel of the UAE military. Alongside the well-established campuses in Abu Dhabi and Al Ain, we have launched a new campus in Dubai Knowledge Park and recently opened a teaching facility in the Al Dhafra Region of the Abu Dhabi Emirate. In addition, a brand-new state-of-the-art campus is planned to open in Al Ain in September 2019.

Patriarchy and its effects in Africa