The closing ceremony of the of 11th Ramadan Women’s Sports Tournament celebrates a successful tournament. 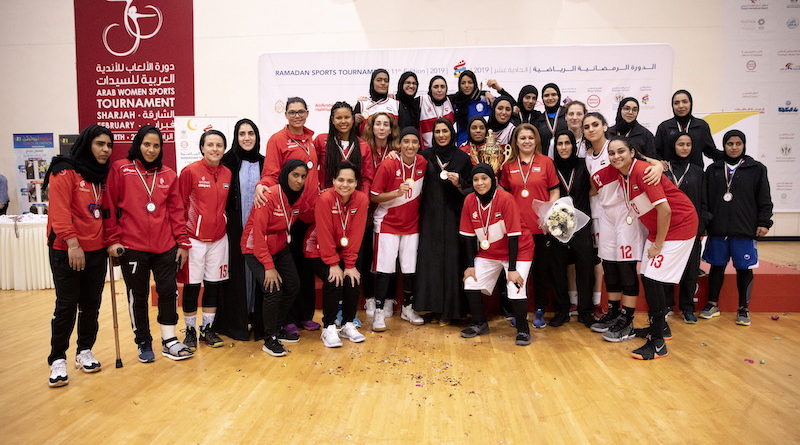 May 15th, 2019, Sharjah (UAE): The Sharjah Women’s Sports Club Team was crowned the basketball champions at the 11th Ramadan Women’s Sports Tournament (RWST) after a glorious final score of 66-25 against Brunei Airline. The Sharjah Police team which placed second secured the silver, scoring 35-19 against the Tasamuh team, while Brunei Airline bagged the bronze medal against Tasamuh team with score of 31-14.

Saqr Al Qasimi: “We are proud of this successful tournament and its role in the development of women’s sports”

Nada Al Naqbi: “We are proud of our athletes’ achievements, especially that of shooter Wafa Khamis who scored 571 points”

Khaled Al Midfa: “Such sporting events gave birth to new talents who would go on to enrich the national teams”

Salim Al-Mutawa: “The basketball championship would be of help in building the national basketball teams”

The Elite Volleyball Academy won the gold medal in the volleyball competition, while the Italian Espera Moonves bagged the silver and Sharjah Women’s Sports Club won the bronze. They were presented their medals yesterday (Thursday).

The basketball and volleyball referees and committees were also honoured.

Sheikh Saqr bin Mohammed Al Qasimi said the 11thedition of the Ramadan Women’s Sports Tournament had been a testament to its success. It had developed into a national platform for honing athletes’ talents. He noted that the winners would be supported by the Sharjah Sports Council.

HE Nada Askar Al Naqbi, said, “This tournament wouldn’t have succeeded to this extent without the dedication and support of Her Highness Sheikha Jawahar bint Muhammad Al Qassimi, Wife of His Highness Sheikh Dr. Sultan bin Mohammed Al Qasimi, Member of the Supreme Council and Ruler of Sharjah, and the logistical support from the various sports unions and the huge turn-out of fans to cheer the sportswomen. This edition has been the biggest success we have had since the launch of the tournament.”

Al Naqbi expressed pride in the athletes’ achievements, especially that of shooter Wafa Khamis who scored 571 points, creating a national record She added that Khamis’s participation in this sporting event was in preparation for the 2020 Tokyo Olympics.

HE Khaled Issa Al Midfa stressed that such sporting events gave birth to new talents who would go on to enrich the national teams. He noted that the 11thedition had witnessed the birth of a distinguished group of athletes, especially in individual games like shooting and archery. The Assistant Secretary-General pointed out to the huge participation in the archery competition which had seen 64 archers compete. He called for increased support for this game across the country.

The tournament which was held from May 8-14 saw the participation of 340 players from 25 teams from across the UAE in four sports – basketball, volleyball, shooting and archery.

Established in November 2016, under an Emiri decree issued by His Highness Sheikh Dr. Sultan bin Muhammad Al Qasimi, Supreme Council Member and Ruler of Sharjah, SWS aims to empower national women athletes and develop human capital in the field of women’s sports. It also seeks to create a talented generation of women leaders in sports, encourage women’s participation in different sports, foster a culture of sports and provide a stimulating environment that contributes to advancing women’s sports.