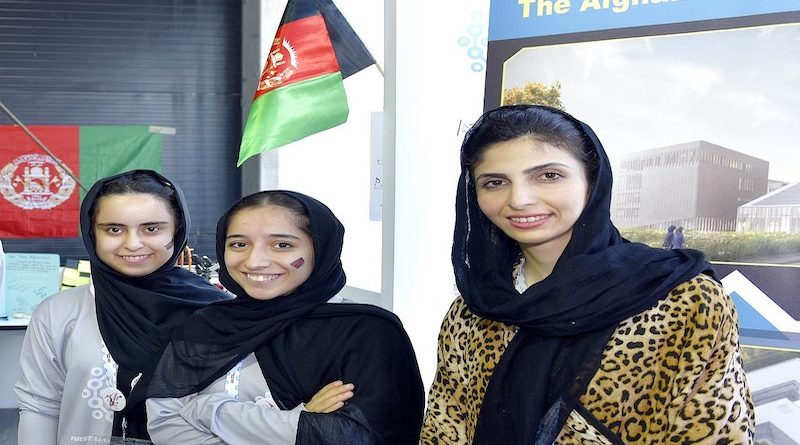 October 27th, 2019, Dubai (UAE): Sofia Nanjari was just nine when she was introduced to robotics. She overheard her brother, then an engineering first-year undergraduate student, complain about how hard robotics programming was. She later went on to YouTube for tutorial videos, and the first thing she ever learned to build and program were traffic light models.

The Chilean teenager has since developed a bee-counting robotic device for her parents, who work in blueberry agriculture. Bees are essential for good blueberry crops but keeping count of the bees was an arduous manual process, she says.

“At the entrance of the beehive, there is a Protoboard and an Arduino with two photoresistors and an LED light at the top of entrance. Through angled shadows of the bees, the robot determines if the bee is entering or exiting, and this information goes into a database on a computer,” Sofia explains enthusiastically.

Sofia is one of five teenage girls who are participating in the third edition of FIRST Global Challenge, currently underway in Dubai, which has brought more than 1,500 students from 191 countries together to invent robotics that can tackle ocean pollution. At the competition, 10 countries – Afghanistan, Chile, India, Ghana, Eswatini, Serbia, Tanzania, Uganda, Vanuatu and Liberia – are represented by all-girl teams.

“We’ve lived through a time where a culture around the STEM field has been created that turns girls away because of a perception of it not being glamorous,” says Dean Kamen, Founder of FIRST, an international youth organization that conducts youth competitions for robotics and hosts initiatives to get the young generations interested in STEM learning. “If we give kids this platform, they’re not just going to stand on the shoulders of the technologists that went before them, but they will improve the existing tech and create new ways of seeing and living in tomorrow’s world.”

One of the most inspiring stories at FGC is perhaps Team Afghanistan that got global attention back in 2017 when they were refused visas to attend a competition in Washington. They have since amassed thousands of supporters on social media and were given special permission through the intervention of US President Donald Trump.

Roya Mahboob, Mentor of the Afghan Dreamers, who is herself a significant public figure as Afghanistan’s first Tech CEO, says: “I’m from a country where women are discouraged from attending school, and traditionally get married before the age of 18.

“Half of Afghanistan’s population still do not have Internet access, and most of them are women. We are talking about people who are not connected to the world or even aware of what’s happening. I think it’s the job of every country, society and communities to invest in their people and prepare for the future.”

“The girls have become a symbol of hope and unity for our country. When they came back from their first competition in the US with a silver medal, the Afghan community recognized their potential, and it totally changed their view of what these girls could achieve,” says Mahboob, adding that the goal of Afghan Dreamers is “to have a positive impact on our society and encourage more children towards STEM education”.

India’s Geared Up Girls team has a powerful motto, ‘We are coding the future, and it’s female’. The team has not just been competing at robotic competitions but have also sought to find ways to give back to the larger community. They started a FIRST LEGO League (FLL) team, working with underprivileged girls in the interior of Central India, and have raised funds to donate an FLL kit to these girls. FLL is an initiative by not-for-profit organization FIRST Global that engages younger students in real-world engineering through challenging them to build LEGO-based robots to complete tasks. They have also conducted STEM workshops for children in Dharavi, Asia’s largest slum in Mumbai.

Geared Up Girls’ member Radhika Sekhsaria, who has been involved in robotics for the past three years, credits her father and brother for introducing her to the field. She shares: “I was always inclined towards the arts, design and photography, but then when I got a chance to get into the robotics team, I actually became one of the main builders of the robot with hands-on experience. It’s been really cool.”

Members of Team Ghana, also an all-teenage-girl team, first started a robotics club at school and taught themselves through internet resources.

“When we were in middle school, and started studying robotics, there were only a few of us. The rest of the girls were just not interested,” says Vanessa Nyame, a 17-year-old member of Team Ghana. “We raise our own funds for the robotics club, we teach ourselves, because we don’t have anyone to support us. Women are underestimated.”

Their mentor, Ben Amoakoh says with conviction: “Over the years, we have limited the capacity of women whether in leadership, in STEM or elsewhere. I strongly believe that equal opportunity needs to be given to everyone right from the start. We need to let the world know that women can be just as good as men, if given that same opportunity.”