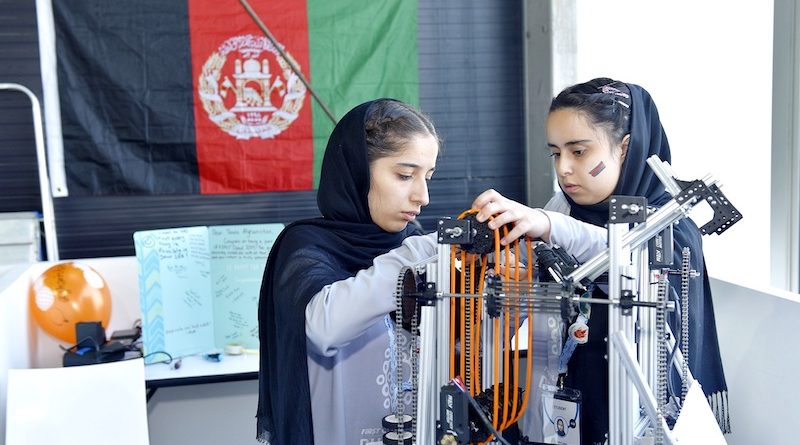 October 27th, 2019, Dubai (UAE): The Afghanistan booth at the FIRST Global Challenge 2019 in Dubai is packed, with hardly any space to move. The all-teenage-girl Afghan Dreamers team are being filmed for a documentary and trailed everywhere by a camera crew while curious bystanders look on.

The girls first garnered global attention in 2017 when they were refused visas to attend a robotics competition in Washington, which prompted an international outcry. Eventually, US President Donald Trump intervened to get the girls special permission to enter the country. But that was before the Afghan Dreamers amassed thousands of supporters and fans on social media platforms.

The situation with the visa refusal turned out to be a blessing in disguise – soon after, the girls received invitations to meet with global leaders such as Canadian President Justin Trudeau and the Speaker of the US House of Representatives, Nancy Pelosi. The Afghan Dreamers also count rapper Will.i.am as one of their sponsors. The robotics team of five have flown around the world competing in international challenges, and won awards at FIRST Robotics World Championships and Robotex International. 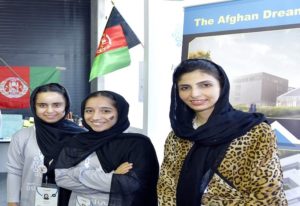 “I’m from a country where women are discouraged from attending school and traditionally get married before the age of 18,” says Roya Mahboob, Mentor of the Afghan Dreamers, who was featured in TIME’s 100 Most Influential Figures in 2013 list for building free internet-enabled classrooms in Afghanistan. “Our society is male-dominated, and professions in engineering or science are often deemed more appropriate for men.”

“Through Afghan Dreamers, we hope to have a positive impact on our society and encourage more girls and boys towards STEM education. It is the responsibility of the government, the wider community and our leaders to invest in the younger generation and ensure that they have a better future,” she adds.

For the third edition of the FIRST Global Challenge held in Dubai, the Afghan Dreamers are competing with 190 other teams from around the world. The team developed a robot with five processes to collect micro- and macro-pollutants in the ocean through a wheeling system, which will then be lifted by a handle and deposited on a processing barge.

“Robotics has taught us to think in a different way, we feel that we can develop solutions for every problem we face,” says Saghar Salehi, a 15-year-old member of the team. Of future inventions, Afghan Dreamers member Fatemah Qaferyan says, “I want to use robotic technology to tackle challenges faced by the elderly, like handling or moving heavy objects around.”

In collaboration with the Afghan government and Yale University, Afghan Dreamers will launch innovation centers that host STEM workshops and encourage knowledge-sharing among the Afghan youth in Kabul and Herat. The purpose is to improve access for students in government schools to robotics and other advanced technologies, so as to create more opportunities for Afghanistan’s young people of both genders in the technology industry.

“These girls have become a symbol of hope and unity for our country. When they came back from their first competition in the US with a silver medal, the Afghan community recognized their potential. It totally changed their view of what these girls could achieve,” says Mahboob. “We will continue to do more, and resolve not stop at the next milestone because then we will lose momentum. This is but a step to much greater things – we want Afghanistan to become known for its technology capabilities, and not just war.”

India’s Geared-Up Girls on a mission to promote STEM