Connecting the Global North And South For SDGs Impact 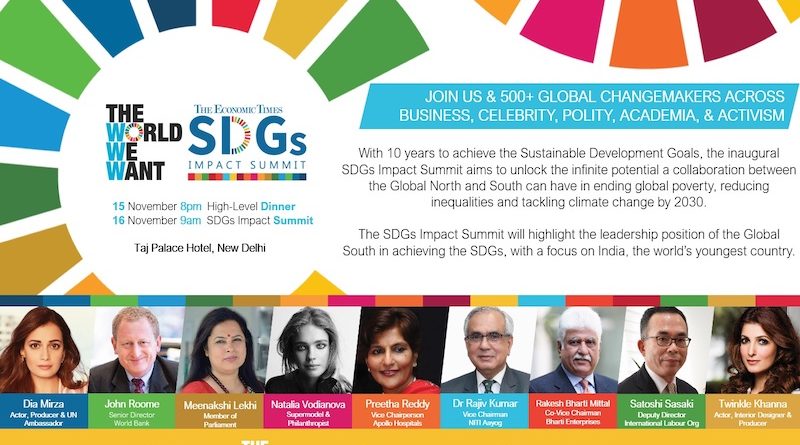 The 17 Sustainable Development Goals (SDGs) were first established at the United Nations General Assembly in 2015 by 193 world leaders, with a commitment to ending global poverty, reducing inequalities and tackling climate change by 2030. With only 10 year’s left to achieve the SDGs, a high-level international forum – SDGs Impact Summit – has been conceptualized with a special focus on unlocking the innumerable potential of a collaboration between the Global North and South in accelerating action on the SDGs. Hosted and spearheaded by the Global South, the first edition of the Summit will bring the focus to India, the world’s youngest and second most populous country, and takes place on November 15-16, 2019, at Taj Palace Hotel in New Delhi.

The Summit will convene a cross-sector, cross-continental collaboration between a dynamic and unusual coalition of leaders and changemakers across business, celebrity, polity, academia, NGOs and activists. Together they will inspire on-ground action by encouraging constructive and open dialogue, storytelling and lesson sharing, which will in turn help to galvanize the formation of partnerships from individuals and organizations within the Global North and South, committed to accelerating progress to achieving the SDGs by 2030.

The Summit will include Plenary and Speed Talk Sessions as well as a Hackathon in search of the next generation of disruptors. Audiences within and beyond the Global South will be encouraged to mobilize action to address some of the pressing issues of the decade including climate change, inequality, poverty, hunger, gender equality, education and government accountability, broadly segmented into four thematic areas – People, Prosperity, Planet and Partnerships.

The World We Want is Founded by Natasha Mudhar, an SDGs campaigner and advocate, who was also appointed India Director of Project Everyone, an organization co-founded by filmmaker Richard Curtis to launch and popularize the SDGs when they were launched in September 2015, to 1.3bn people in India. Speaking ahead of the global announcement for the SDGs Impact Summit, Natasha said: “Currently, the discourse surrounding achieving the SDGs has been predominantly hosted by the West, which has somewhat limited the offering of the Global South. Without support and engagement from the South, the achievement of the SDGs will not be possible.

“We are living in an era by which the resources to ensure the sustainable future of our planet and human race are available. Yet these resources cannot be fully utilized until we explore the true potential of cross-sector collaboration, where the North meets South, East meets West, private sector meets public, business meets government, innovation meets investment and entrepreneur meets activist. The Summit will provide an interactive stage to the international rule breakers, problem solvers, storytellers, thought shapers and renegades with a cause who are committed to achieving the Sustainable Development Goals by 2030 and will unlock unimaginable possibilities between the Global North and South. The vision behind this Summit is to become the blueprint and facilitator for change as we move into the final decade of delivery from 2020.”

The SDGs Impact Summit will coincide with the launch of key initiatives to inspire advocacy and SDGs action.

The World We Want has conceptualized a 10-year grassroots plan starting in 2020 and beginning in India before rolling out to other Global South countries, to support the nation to accelerate its progress in achieving its targets by 2030. Agenda 2030 India will focus on cultivating cross-sector collaborations between corporates, celebrities, NGOs, young changemakers, academia and policy officials through the launch of SDGs Hubs. Each Hub will be aligned to specific SDGs, SDGs targets and the government’s national and local agendas. The coalition members will raise awareness of the SDGs targets, leverage their networks to demonstrate action, showcase inspiring stories and mount a disruptive campaign to build a demand for change.

Hello! India Magazine will publish a special issue, Power of Giving on stands in January 2020, marking the countdown to a Decade of Delivery. The special edition issue will be aligned to SDGs and will spotlight the world’s most impactful thought leaders and changemakers across multiple sectors. The special edition will coincide with the Hello! India Power of Giving Gala Ball & Changemakers Awards.

The World We Want with partners Global Goals World Cup, will organize a special mixed gender celebrity version of the flagship football match for SDG5: Gender Equality in 2020.

“We are not content with a singular event to pedal the success of the goals. The SDGs Impact Summit has been conceptualized to be a clarion call for an ongoing strategic plan of action across the proceeding decade. The SDGs can only be achieved with continuous calls to action, which can be achieved as the Summit takes place on an annual basis. One single sector cannot possibly solve the world’s problems by themselves, but a universe of stakeholders in tandem can”, Natasha added.

To register your interest to partner or to attend, log onto SDGs Impact Summit

About the SDGs Impact Summit 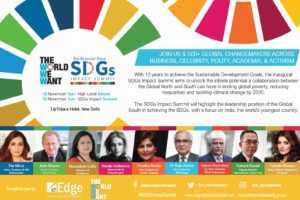 The SDGs Impact Summit is a high-level international forum with a special focus on unlocking the innumerable potential of a collaboration between the Global North and South in accelerating action on the Sustainable Development Goals (SDGs). Whilst the Global North holds one quarter of the world’s population and controls four-fifths of the world’s income, the Global South inversely bears three quarters of the world’s population and has access to only one fifth of the world’s income. The SDGs Impact Summit has been specifically conceptualized to bridge this economic and resource divide, by unlocking borders, unleashing innovation and localizing solutions to address complex world issues and explore solutions to achieve the SDGs by 2030. The multi-sector event will convene a dynamic coalition of sector leaders and changemakers across business, celebrity, polity, academia, NGOs and activists to encourage on-ground action through Plenary and SpeedTalk sessions, Hackathons, SDGs Marketplace and other impactful activities. The annual summit will be an interactive space for coalition building and to galvanise action within and with the Global South to address some of the pressing issues of the decade including climate change, inequality, poverty, hunger, gender equality, education and government accountability, broadly segmented into four thematic areas– People, Prosperity, Planet and Partnerships.

About The World We Want

The World We Want (WWW) is a global impact enterprise working with organizations and individuals to accelerate the progress to achieving the UN’s Sustainable Development Goals by 2030. WWW aims to utilize its global reach and expertise to convene governments, corporations, celebrity and popular culture. government, campaigners, civil society, individuals and not for profits, leveraging ideas, networks and technologies to bring visions to life and create sustainable solutions. The World We Want will be powered by “Accelerator” ventures aligned to the Sustainable Development Goals, with a focus on convening leading organizations, corporations, public figures including celebrities, campaigners and thought leaders around the world to awaken social consciousness and drive meaningful change. Ventures include using expertise to help organizations add real meaning to the lives of stakeholders, identifying and developing the change makers of the future, empowering the world’s citizens through supporting open data policies, harnessing the power of celebrity and pop culture to entertain and inspire audiences and supporting critical impact projects through an ethical investment fund. With an international team, WWW has been co-founded by Teji Singh and Natasha Mudhar, seasoned entrepreneurs with a commitment to doing well, by doing good. They are also the driving force behind the award-winning global business and communications consultancy Sterling Group.