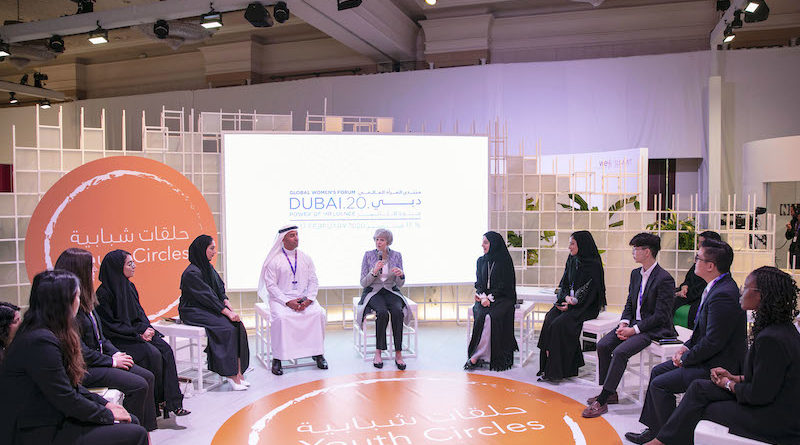 May participated in a Youth Circle on the second day of Global Women’s Forum Dubai (GWFD) 2020, alongside Her Excellency Shamma Al Mazrui, UAE Minister of State for Youth Affairs and His Excellency Abdulla Lootah, Director General, Federal Competitiveness & Statistics Authority. They were joined by students from UAE University, New York University Abu Dhabi, and Emirates Diplomatic Academy, who also shared their opinions on gender equality, the implications of quotas, and strategies to narrow gender gaps.

In response to a question about what gender equality means to her, Theresa May, who served as the UK’s second female Prime Minister from July 2016 – 2019, said: “Fundamentally it’s about making sure that women and men have equal opportunities. We need to ensure we have the legislative background that doesn’t discriminate against women, and the support mechanisms in place to enable women to achieve what they want to achieve. It’s also about attitude though – and ensuring that nobody makes an assumption about what you can do because of your gender. When we look at men and women, either of these could be a leader.”

Theresa May: “We need to change attitudes to ensure that nobody assumes what you can do because of your gender.”

Mrs May identified the underrepresentation of women as one of the key challenges she has faced while working within male-dominated sectors. She said: “It’s difficult when you’re in a meeting room and you’re the only woman. Sometimes nobody wants to listen to you. If you have more women sat around the table, you have a different dynamic. Decisions are also better when they are made by a diverse range of people.”

She also shared her views on the two characteristics that make women strong, effective leaders, saying: “It’s important to highlight that women can be every bit as tough as male leaders, but there are certain things that I think women do more naturally. The first is that they really listen – at the grass roots and on the ground, in an effort to make a difference in people’s lives by understanding what needs to be addressed, which is what political life is all about. I also think women act in a more consensual way, and work to find agreement among people more.”

The Youth Circles initiative is governed by the UAE Federal Youth Authority. It was launched to inspire youth-centric dialogue across a variety of topics, supporting sustainable engagement with young people in order to shape innovative solutions to global challenges.

HE Shamma bint Suhail Faris Al Mazrui said: “The Youth Circle was a conversation particularly about women’s role and ability to influence our nation’s progress and our world’s development. We explored several central questions about influence:  what does it mean in 2020 to have influence as women in our opportunity to be nation-builders and global citizens? And what is the role of youth in achieving greater gender balance and boosting women’s political leadership?

“The UAE’s Federal Youth Authority hears the voice of youth and we act to infuse it with solutions and solution-makers. Today’s youth circle represented the intersection of a major movement for women’s influence around the world, a major world leader (the Right Honourable Theresa May) and an important conversation with our nation’s most valuable assets: youth.” 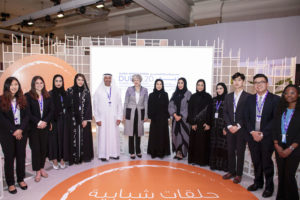 During the session, His Excellency Abdulla Lootah, said: “It’s important that we don’t distinguish by gender. Within the workforce, we’re all employees, with a certain role and title, who need to showcase what we can deliver as individuals. I have never been given direction on recruiting female employees – all I know is we need to have the best talent. Women have all my support, as we continue to work towards the nation’s growth and progress under one umbrella.”

The two-day Global Women’s Forum Dubai 2020 was held at the Madinat Jumeirah in Dubai, UAE, under the patronage of His Highness Sheikh Mohammed bin Rashid Al Maktoum, Vice President and Prime Minister of the United Arab Emirates, and Ruler of Dubai.

Global Women’s Forum Dubai (GWFD) 2020 is an international event being held on February 16-17, 2020 at Madinat Jumeirah in Dubai, United Arab Emirates. It is organised by Dubai Women Establishment (DWE) and held under the patronage of His Highness Sheikh Mohammed bin Rashid Al Maktoum, Vice President and Prime Minister of the United Arab Emirates and Ruler of Dubai.

Building on its theme ‘The Power of Influence’, GWFD 2020 offers a global platform to discuss improved policies and foster partnerships that further women’s positive impact across four key areas: government, economy, society, and future. The event aims to engage over 3,000 attendees – including global leaders, public and private sector experts, as well as entrepreneurs, academics and students – through workshops and keynote sessions.

The Forum’s Knowledge Partner is the Organisation for Economic Co-operation and Development (OECD).  Alongside the Women Entrepreneurs Finance Initiative (We-Fi), DWE is also co-organising the We-Fi MENA Regional Summit – a side-line event that will host entrepreneurs from the region’s emerging economies.

In line with the UAE’s ongoing commitment to advance gender balance across all sectors, GWFD 2020 will drive female engagement and participation in the workforce, and is a testament to the country’s position as a global role model for the advancement of women.

The Establishment’s mission is to advance the engagement and socio-economic participation of women across various sectors and fields. DWE’s strategic plan 2017-2021 focuses on providing recommendations to shape policies; fostering strategic partnerships; developing capacity-building programmes; and facilitating the exchange of knowledge and research by organising global events and leading initiatives.