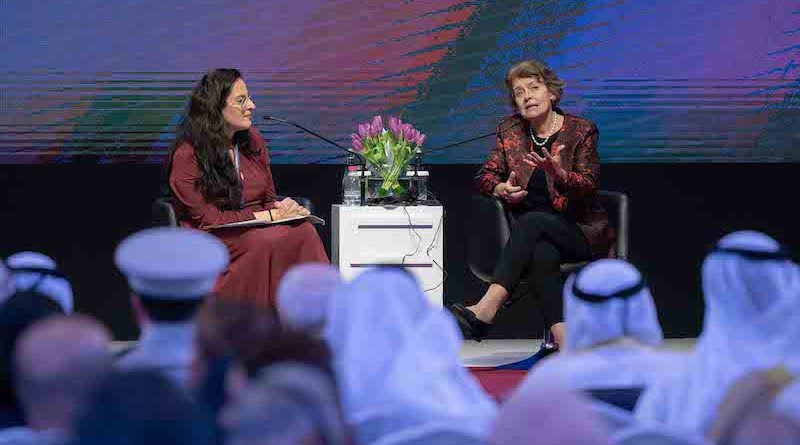 March 4th, 2020, Sharjah (UAE): To explore the impact of cross-cultural communication on culture and its impact , the ninth edition of the International Government Communication Forum (IGCF 2020) being held at Expo Centre Sharjah, hosted on its inaugural day a dialogue with HE Irina Bokova, President of the Academy for Cultural Diplomacy in Berlin and former Director-General of the United Nations Educational, Scientific and Cultural Organisation (UNESCO). The moderator was Sally Mousa, radio presenter at Sharjah Broadcasting Authority -Pulse 95 Radio.

Irina Bokova thanked His Highness Sheikh Dr Sultan bin Mohamed Al Qasimi, Supreme Council Member and Ruler of Sharjah, for the platform being afforded to culture in Sharjah. She said: “There is no better place than Sharjah to speak about cross-cultural communication and the process of social inclusion. I remember, the last time I was here in 2016 for the launch of UNESCO’s Unite4Heritage initiative.” 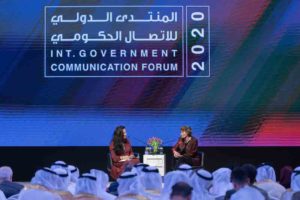 She stressed that cross-cultural communication echoed very deeply in her consciousness and gave credit to Sharjah. “More than 20 years ago, His Highness the Ruler of Sharjah created an important prize, the UNESCO–Sharjah Prize for Arab Culture, and what is most important is this prize is given to two personalities, one from the Arab world – a writer, a creator, somebody who is working to promote knowledge about their culture; and the other, a global personality. I think this is a wonderful example indeed of cross-cultural communication,” she noted.

Bokova acknowledged that despite the cultural divides and differences, which are at the root of several major issues faced across the world, the world offers enormous opportunity to know about cultures and people at the other end of the globe. She said: “But how do we reach out to them? Our approach is not up to the speed of the enormous changes that are coming up with these technologies. I think we have to catch up and this is where hard questions about living together come to the fore. Questions about how we respect each other. I think the right word to use here is mutual respect. Mutual respect comes with knowledge, through communication and this is where education and knowledge will solve the problem.”

She commended Sharjah for its approach to this problem. “Sharjah has been so successful in this because of His Highness’s thrust with 40 years of the culture project, the belief in the power of culture,” reiterating that we need to be focus on keeping lines of communication open and bridge inequalities by enabling people equitable access to technology and progress. 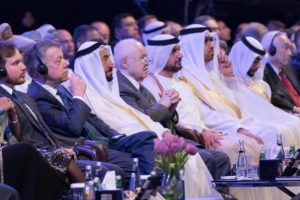 Bokova believes that storytelling can be a vital tool to promote people’s knowledge of cultural diversity, and enhance their sense of belonging to the heritage of other cultures. “I think this notion of common space, of common humanity, is very important. This is where we are connected, and this is where culture and heritage are common space,” she said, adding, “We have to draw on the stories of the past to be able to tell the stories of the present. Under UNESCO, we have more than 1,100 world heritage sites and there you see all cultures represented. It  displays humanitarian diversity and if we don’t cherish this and protect it, we will not be doing justice to our ancestors as well as to our future generations.”

“On the other side, culture and creativity go hand in hand. Science cannot progress without the backing of culture, and this is where education is critical. That is why Agenda 4 of the 2030 Sustainable Development Goals is titled ‘Education for Model Citizenship. It is about the fact that we are really global citizens and why intercultural knowledge is so important if we wish to live in peace,” she said.

About the representation of culture in the media, she said, “It is not by chance that some of the best minds and creative work are cutting across cultures. It all boils down to culture. Be it in peace and reconciliation, we know that culture can heal.”

Bringing together 64 leading global thinkers, top government officials and communication experts from the Arab region and around the world, IGCF 2020 is centered around four key pillars: Embedding a culture of engagement in government; Technology as a community enabler; Communication through culture; and holistic well-being.