To interrupt unconscious gender bias in the workplace, Campaign Engages Men and Offers  Multiple Languages in Slack Plugin and Other Tools. 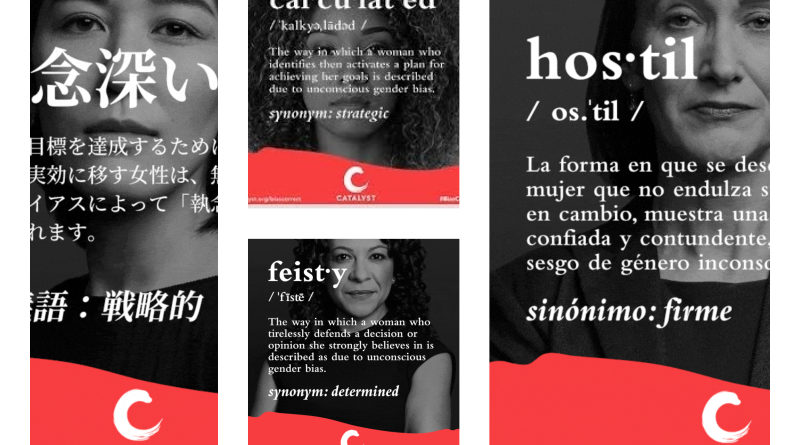 March 4th, 2020, New York (USA): Catalyst is celebrating International Women’s Day (IWD) 2020 with a reboot of its successful #BiasCorrect campaign to interrupt unconscious bias by highlighting the power of words used to describe women in the workplace.

Building on its 2019 IWD #BiasCorrect campaign success – which featured images of women leaders and influencers like Hillary Clinton and Sheryl Sandberg sharing biased words used to describe them in the workplace, along with a Slack plugin to correct gender-biased language – this year’s campaign has expanded to include men. The goal is to demonstrate that women and men with the same talents and skills often are described in very different ways, creating barriers that can adversely impact women’s advancement. 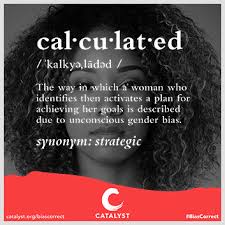 Last year’s campaign, in partnership with women-led brand transformation company Burns Group, reached an estimated 188.5 million people, and the hashtag #BiasCorrect attracted the interest of more than 32 million on Twitter. The #BiasCorrect webpage received more than 114,000 visits from 89 countries across six continents, and since 2019, nearly 300 workplace teams have downloaded the #BiasCorrect plugin in Slack.

“The response to last year’s #BiasCorrect campaign confirmed that many people are unaware of the impact of unconscious gender bias in the workplace. Therefore, we knew it was important to continue to educate everyone about how language affects inclusion,” said Lorraine Hariton, Catalyst President and CEO. “We know the problem isn’t fixed, and we’re engaging men as gender partners in our 2020 #BiasCorrect campaign to interrupt bias and help women advance.”

The #BiasCorrect Slack plugin tool is available in English, French, German, and Spanish. The plugin, updated by WillowTree for the 2020 campaign, tags unconscious bias in real-time conversations on work-based chat platforms such as Slack, identifying words that create harmful gender stereotypes by suggesting alternatives, such as “passionate” to replace “emotional” and “boss” to replace “bossy.” It is available as an open-source code and can be adapted for other instant-messaging platforms. 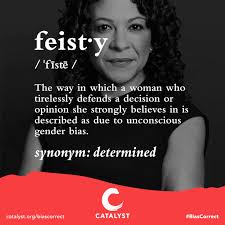 The #BiasCorrect website features video testimonials from leaders and influencers who have faced gender bias; customizable social media posts for download; and information on how individuals and companies can combat unconscious bias, including a photo uploader enabling men and women to add their own #BiasCorrect words.

“We felt it was important to extend our work with Catalyst to make #BiasCorrect even more inclusive,” said Joanne McKinney, Burns Group CEO. “It’s an unfortunate truth that gender bias is universal—and Catalyst’s global footprint enables them to create wide-reaching tools that drive change.”

Catalyst invites individuals and companies to visit the #BiasCorrect webpage, which provides resources for both men and women to help understand, interrupt, and correct unconscious bias. The campaign will also be featured in various regions and cities in posters at bus stops and in elevators. Bank of America is the lead sponsor for this campaign.

About Catalyst
Catalyst is a global nonprofit working with some of the world’s most powerful CEOs and leading companies to help build workplaces that work for women. Founded in 1962, Catalyst drives change with pioneering research, practical tools, and proven solutions to accelerate and advance women into leadership—because progress for women is progress for everyone.

About Burns Group
Burns Group is a brand transformation company that bravely co-creates the future of brands, young and old. We bring bravery to established brands and experience to startups. To learn more, visit burnsgroupnyc.com