Impact on global food supply challenges and environmental concerns will be discussed. 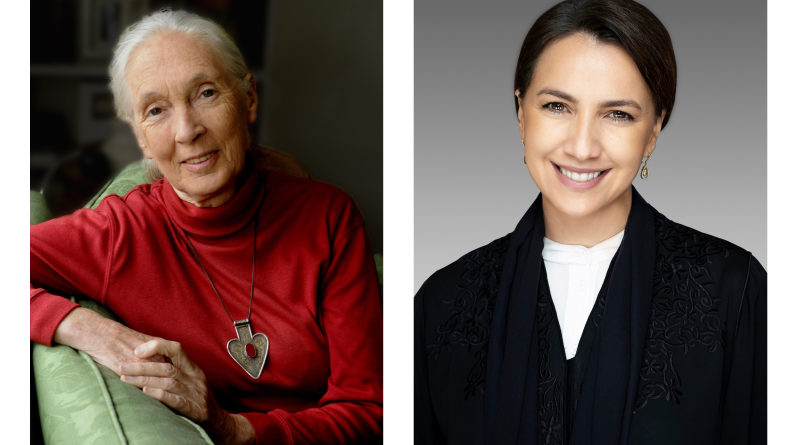 June 1st, 2020, Dubai (UAE): ‘Sustainability  – Have we pulled back from the brink?’ is the second discussion in the Literary Conversation Across Borders digital series, with Dr Jane Goodall, one of the world’s best-known environmental scientists in conversation with Her Excellency Mariam bint Mohammed Al Mheiri, Minister of State for Food Security, on Saturday, 6 June 2020 at 19:30.

The session follows  the inaugural event in the ‘Literary Conversations Across Borders’ series, which saw more than 3,500 people from 46 countries registered and able to tune  in to the live discussion via Zoom and  the YouTube channel.  The event took place on Saurday 30 May  with Indian politician Shashi Tharoor and His Excellency Zaki Nusseibeh Minister of State: Office of  Public and Cultural Diplomacy in a  debate  on how the events of 2020 will change the course of history. This is the highest number of attendees that have attended a digital event in the UAE.

This second session, which includes live Q&A, will look at the the impact the pandemic and lock-down measures have had on our lives, and how this might influence the ways forward  in making a more sustainable world in terms of the global food supply challenges and the natural world.

The ‘Literary Conversations Across Borders’ project is a new initiative to promote international cultural understanding through the power of books and words which has been launched by the UAE Office of Public and Cultural Diplomacy and the Emirates Literature Foundation. It uses a digital platform to host Emirati writers and commentators in live discussions with high profile experts from around the world on a variety of critical topics.

There will be eight sessions in this first Literary Conversations Across Borders series. Further details and more authors will be announced shortly. 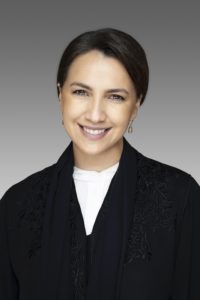 Her Excellency Mariam bint Mohammed Al Mheiri. was appointed as Minister of State for Food Security following the Cabinet reshuffle of October 2017. Her responsibilities include overseeing the development of the necessary infrastructure that would ensure the country’s food security objectives, in line with UAE Centennial 2071 Plan.

In addition, H.E. represents the UAE federal government in the Food and Agriculture Organisation of the United Nations (FAO) as well as the International Center for Biosaline Agriculture (ICBA). She is a member of the Board of Directors in the Abu Dhabi Agriculture and Food Safety Authority (ADAFSA) and also a member of the Board of Trustees of the Khalifa International Award for Date Palm and Agricultural, the Dubai Future Foundation (DFF) and the World Economic Forum’s Global Future Council on Food Systems Innovation. She has also been nominated to lead some unique projects in the field of aquaculture under the initiatives of H.H. the President of UAE, through the Ministry of Presidential Affairs to establish the foundation needed for this emerging economic sector to develop and thrive in the country. In addition, she is also a member of the overseeing council of the recently launch Ministry of Possibilities. H.E. Al Mheiri previously served as Assistant Undersecretary for Water Resources and Nature Conservation Affairs at the Ministry of Climate Change and Environment, where she was appointed to oversee the Biodiversity, Fisheries, Coastal & Marine Sustainability and Marine Research departments. H.E. Mariam Al Mheiri received her bachelor and master’s degrees in Mechanical Engineering from the Rheinisch-Westfälische Technische Hochschule (RWTH) in Aachen, Germany. 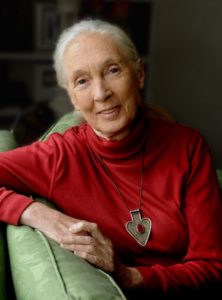 DrJane Goodall DBE who has studied primates for the last 50 years with her Chimp mascot. Pic: STUART CLARKE. March 2010.

Jane Goodall is one of the world’s best-known environmental scientists. She started studying chimpanzees in 1960 in Gombe Tanzania, where research continues today. The Jane Goodall Institute (JGI) was founded in 1977 and there are now JGI offices in 27 counties. In 1991 she formed Jane Goodall’s Roots & Shoots, a programme that empowers young people of all ages to undertake projects for their local community, for animals and for the environment, and is now active in more than 60 countries. In 1994 Jane formed TACARE (Take Care) which is a community-centred conservation and development programme which partners with communities around Gombe to create sustainable livelihoods while promoting conservation goals. Dr Goodall’s numerous awards and honorary degrees include France’s Order of the Legion d’Honneur, the Medal of Tanzania, and Japan’s prestigious Kyoto Prize. In 2002 Jane was appointed to serve as a United Nations Messenger of Peace and in 2003 she was named a Dame of the British Empire. She is author of many books and has featured in many films and documentaries around the world.

About the Office of Public and Cultural Diplomacy (OPCD)

The Office of Public and Cultural Diplomacy (OPCD) is a coordinating entity that supports the objectives of United Arab Emirates diplomatic missions around the world through arts and culture programming, research and content design. OPCD is dedicated to promoting UAE heritage and values and facilitating cross-cultural dialogue in the service of improved global cooperation and international prosperity.

About the Emirates Literature Foundation:

The Emirates Literature Foundation is a not-for-profit organisation which supports and nurtures a love of literature in the United Arab Emirates and the region, through a programme of varied cultural initiatives.

Established in 2013 by Royal Decree issued by His Highness Sheikh Mohammed Bin Rashid Al Maktoum, Vice-President and Prime Minister of the UAE and Ruler of Dubai, the Foundation aims to foster a love for literature, with a focus on the Arabic language.

In line with the National Reading Policy of the UAE, the Foundation has implemented several long-term projects including the School Librarian of the Year Award and the annual Arabic Language Week, as well as conducting year-round student education programmes, book clubs and creative writing courses. The Foundation’s previous initiatives included the 2016 Dubai Translation Conference and the 2017 Dubai International Publishing Conference, which hosted a number of international participants.

The Foundation is also the governing body of the Emirates Airline Festival of Literature, the UAE’s premier literary festival, which will be held 2– 6 February, 2021.