Chiamaka Adinnu writes about the disproportionate burden of water scarcity on women and highlights the importance of increasing water accessibility. 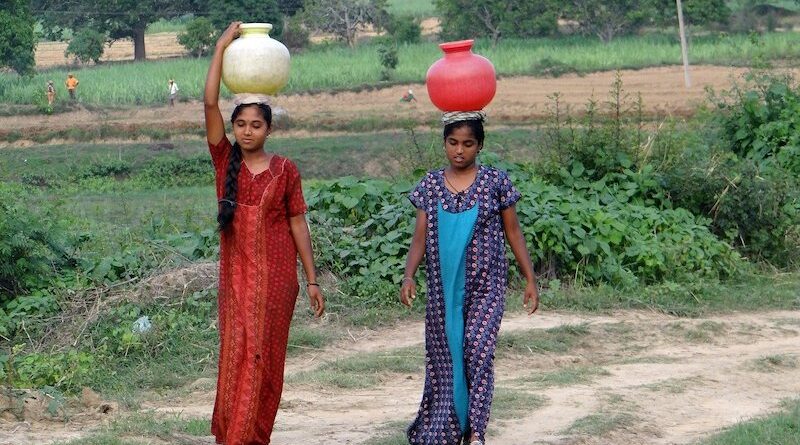 Globally, countries are faced with key water challenges and diseases like dysentery, cholera, and diarrhea. In addition, there has been a rapid rise in water scarcity such as droughts all over the world. While not an unfamiliar notion, this does represent what might as well be our future if adequate measures are not put in place.

Let’s take a look at some important statistics. According to a research by the WHO/UNICEF Joint Monitoring Programme for Water Supply and Sanitation, 2.2 billion people lack access to safely managed drinking water services and 785 million people remain without even basic drinking water services. Present figure indicates an average of 1.6 million deaths annually, with over 90% of these deaths comprising of children under five years, due to a host of water-related health problems such as dysentery, cholera and diarrhea diseases.

Do the above figures tell you anything? There are wide socio-economic and financial implications of water scarcity in countries experiencing it.

But when we think of the most vulnerable group, we should think about women; who are disproportionately affected and burdened with the responsibility of water collection from far distances. In most developing countries, water sources are usually off-premises and far off from their homes. In this case, it is usually the women who bear the brunt of a failed water resilience system and have to break the far distance involved to collect water. In Africa and Asia, for instance, women walk an average distance of six kilometers to collect water. Figures by the United Nations show that three out of five households and 53 countries out of 73 countries rely majorly on women to collect water from sources that are far off from their homes.

Economically, women are disadvantaged when they engage several times daily in a task that is as time-consuming as collecting water from far distances. A survey showed that an average round trip in the collection of water from off-premise sources takes 30 minutes or more. Globally, women and girls spend 200 million hours every day collecting water; a figure that starkly highlight the amount of time spent on this task, rather than other productive activities. It speaks volumes about the combined debilitating effect on their socio-economic importance.

Physically, the far-off water sources poses a threat to the lives and security of these women. By walking, sometimes alone or without adequate protective measured in place, they are invariably exposed to many dangers.

Health-wise, the consequences are far-reaching. Take, for instance, the basic life processes of women like lactation, gestation (pregnancy), and menstruation. During these processes, women require more water intake than their male counterparts, most of which may not be readily available. An article by the United Nations suggests that the basic drinking water requirement for lactating women engaged in moderate physical activities is 7.5 liters a day, as opposed to the 1.6 liters of water that the average man daily needs for drinking. In situations where these women do not have access to the required volume of water for their domestic and personal use, one can imagine the not-pleasant consequences it may have on their health.

This worrisome development begs the question; what can be done to improve access to quality water for everyone once and for all?

In July 2010, the United Nations General Assembly included access to water as one of the Sustainable Development Goals (SDG 6). This is in recognition of water as a basic human right; an intervention strategy that is applaudable considering the substantial results and differences it has made in building water resilience on a global platform.

While this remains relevant, it is important to know that the issue of ensuring water for all is not just the duty of some selected category of individuals or stakeholders. We all have a role to play in building a more resilient water system. A good way to start is to raise awareness and promote the education of citizens for the sustainable use and efficiency of water. It is common knowledge that sanitation is linked to water and it is impossible to mention one without the other. Therefore, sustainability of this ‘finite’ resource is nothing without adequate sanitary practices by people as well as efforts by the government and civic authorities in terms of not just awareness but a better infrastructure. Practices like open defecation, uncontrolled, and ineffective waste disposal have detrimental effects on the ecosystems and contribute hugely to disease pandemics. But by promoting good hygienic practices through increased awareness and an appropriate infrastructure, communities will be able to make positive changes and choices for themselves, which in turn will decrease the mortality rate associated with water-related ailments.

In addition, there is a need to mainstream accessibility to water into national development planning and budgeting processes. Increased accessibility to water is possible when adequate funds are channeled into building water infrastructures (such as boreholes, water wells etcetera), particularly in rural communities where those infrastructures are either non-existent or limited in number.

There is no doubt that governments have a key role to play in improving accessibility to water. Each country should set up water-related goals and targets and implement them under the sustainable development goals. Perhaps, a good way for governments to do this is to implement rainwater harvesting systems to collect and store rainwater, which can be treated for drinking and domestic use.

There can be no overestimating the importance of water to human life. Knowing this, it is imperative that efforts are made towards sustaining this natural resource, in addition to increasing everyone’s accessibility to it. Everyone has a role to play in order to make this happen. It is a huge task that awaits us; one that we can surely accomplish if all hands are on deck.

Chiamaka Adinnu is a Food Scientist who is passionate about gender advocacy and journalism. She has over five years of experience in high-level research and academic writing, with several awards to her name. Her work is focused on addressing issues relating to food insecurity and gender inequality and so, writes Ananke’s monthly column on food insecurity. A contemporary youth activist and gender advocate, she currently volunteers with several Non-profit organizations in rendering services to humanity. Chiamaka is also a voracious reader of all things book, in order to make for an informed opinion in her writings. As a long-term goal, she aims to engrave her name in the sands of time through her various writings.

Image by Bishnu Sarangi from Pixabay

Concrete steps sought from govts to push world out of crises