#GirlsInICT Inspiring The Future Series | Ananke completes its celebration by showcasing Dr. Bushra Anjum, a trailblazer in tech and data science whose achievements are a testament to her undeterred resilience, commitment and hardwork. 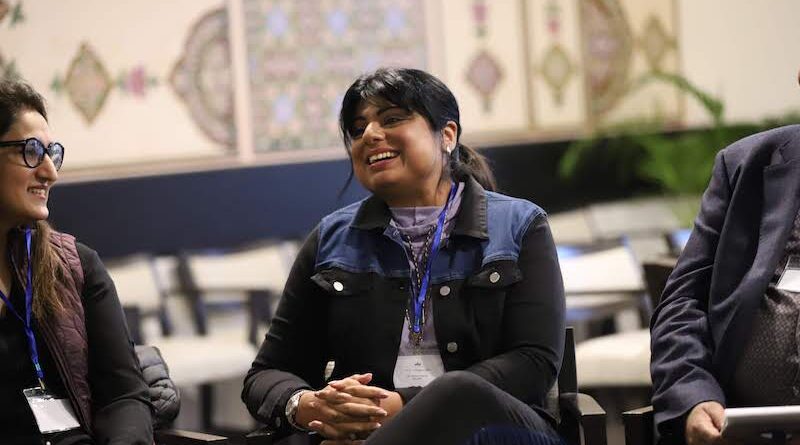 “My life has been led by the maxim, ‘I will figure it out.’ The thought has excited me as I embarked on new ventures, calmed me as I faced unexpected challenges and soothed me in times of grief.” Dr. Bushra Anjum

Before sharing her story, Dr. Bushra Anjum emphasized that neither her life nor her challenges have been out of the ordinary. Rather, she had it easier than some as she has been privileged to have supportive parents and encouraging teachers and mentors. Her intention behind sharing a few experiences from her life is that if someone is facing any of these challenges at the time of reading this article, they should know they are not alone, and they can reach out to her to talk things through if they choose to.

Dr. Anjum was born and raised in Pakistan. She grew up in a middle-class family; her father served in the Pakistan Army, and her mother was a stay-at-home mom. Dr. Anjum is the youngest of three daughters. While doing her Masters in Computer Science from Lahore University of Management Sciences (LUMS), she showed interest in studying abroad for a Ph.D. degree, though she had not lived far from home, ever. Something she vividly remembers is having a detailed conversation with her father, where he stated, “If you want to go, I will support your decision. However, there will be many challenges coming your way that you will probably have to face alone; are you ready for this?” She responded, “I don’t know about being ready, but I do know that I have been trained well by you (my parents) and my teachers. I know I will figure things out.”

Fourteen years ago, she came to the United States to pursue a graduate degree in Computer Science from North Carolina State University. One of the many challenges she faced was the language barrier. Although her reading and writing skills were excellent, she struggled with speaking English fluently as she had no prior experience of it. She recalls a story from her first month in the United States is going to an ice cream shop and saying, “I will wish to get a vanilla ice cream,” and getting smirked at as it was an unusual phrase. “I will figure it out,” she whispered to herself. With time, effort, and practice, she improved her English speaking proficiency. Alongside, she engaged in activities with the Office of International Students, raising awareness of the struggles faced by international students and how the community can help increase their sense of belonging.

In her second year of graduate school, her mother was diagnosed with breast cancer in Pakistan and later passed away fighting this battle. Dr. Anjum was struck hard by these unfortunate events, especially as she was by herself in another country. She visited Pakistan briefly to be with her father and sisters and came back for the next semester. However, she couldn’t focus on her research, and her studies were affected as well. Her commitment was firm though, “I have to finish my degree, my mother would have wanted that; I will figure it out.” In the next few months, she learned how to grieve, to be kind to herself and acknowledge her own pain, to be able to cry and mourn without shame, and to be open about her feelings of loss with those who cared for her. 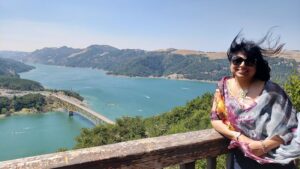 As six months passed by, she was able to slowly pull herself together. She graduated in 2012 with a 4.0 GPA and received her Ph.D. in Computer Science. Her dissertation was selected to be published by the international independent publisher WILEY ISTE. Alongside, she completed her teaching training and received the Certification of Accomplishment in Teaching.

After graduating, Dr. Anjum went back to Pakistan and started an academic career. She took this time to contemplate and weigh her future options. Also, she had envisioned a highly ambitious career for herself, one that spans both industry and academia, in both Pakistan and the United States. She believed she could figure out a way to achieve this. She sought advice from her father, teachers, and mentors on how best to lead a multipotentialite career, and as per their consistent counsel, decided to make her base in the United States. Thus, she returned to the United States and applied for permanent residency in the highly competitive achievement-based category EB-1A “Aliens of Extraordinary Ability.” Her application was approved in less than six months.

In the past decade, Dr. Anjum has had the opportunity to teach and mentor university students both in Pakistan and the United States. She has worked at Amazon and then joined a San Francisco based startup Doximity as a data scientist. She later got promoted and is currently serving as the Analytics Manager at Doximity leading the data department. She has also served as a consultant with Pakistani student incubators and startups. Additionally, she has published research papers with colleagues in the United States. Also, she has been serving as a community leader, a mentor, and a speaker at numerous international forums. More details on her work and service activities can be found on her website. Looking back, Dr. Anjum is grateful that she has the opportunity to lead a career as ambitious and fulfilling as she has envisioned, even better. 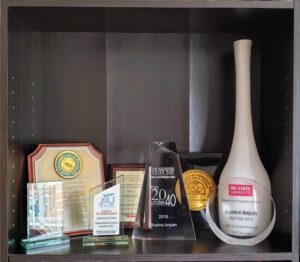 As an immigrant woman, Dr. Anjum did face struggles, and at times from fellow female colleagues. She encountered situations where veteran colleagues felt threatened by her success, which created hostility in her work environment. As a woman in technology, she experienced and confronted misogynistic biases. She also dealt with situations where she was expected to establish her point of view as a technical leader while walking the tightrope of authority vs. likeability, a unique challenge for all women leaders. Her “I will figure it out” attitude has been her strength throughout. Patience, good judgment, and wisely picking the right battle is her best advice to fellow immigrant women.

For distinguishing herself through professional practice and service, Dr. Anjum received the “Outstanding Young Alumni Award” from North Carolina State University in 2017. Also, she received the “Tribune Top 20 Under 40 Award” in 2018 for her community service initiatives combined with her career excellence. Most recently, she has been awarded LUMS Vice Chancellor’s Alumni Achievement Award 2019 in appreciation of the representation and demonstrated positive impact of LUMS alumni to the communities we serve.

As a final thought, Dr. Anjum shared that the most significant figure and role model in her life has been her father. He has been her confidant and her most trusted advisor. Unfortunately, a few years back he had a spinal injury and passed away two days before her departure to Pakistan. That’s a story for another time. She still struggles to accept the loss. Eventually, she is hopeful she will figure out a way to make peace with it and move on while keeping her father’s memory alive in meaningful ways. In celebration of her father’s life, Dr. Anjum shared a few of his words that have encouraged her while growing up and are a source of strength for her, even today.

“You are not my or anyone else’s property.”

“Go ahead with it; we will deal with what happens.”

“These are risks, but it is your decision. I will support you, no matter which way you go.”

“I trust your judgment.”

Dr. Bushra Anjum can be reached via social networks https://www.linkedin.com/in/bushraanjum/,https://twitter.com/DrBushraAnjum and via her personal website https://www.bushraanjum.info/contact