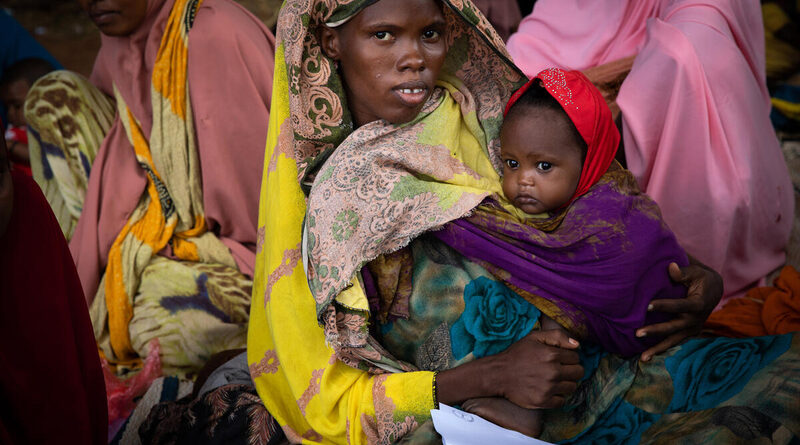 Image credits and info: © WFP/Samantha Reinders | Somalia. Ayan (25) with her daughter Mushtaq (15 months) in the waiting area of the WFP funded Kabasa MAM Health Center (more below)
by ANANKE September 6, 2022

September 6th, 2022, (Mogadishu, Somalia): In Somalia, the United Nation World Food Programme is delivering life-saving assistance to more people than ever before, reaching 3.7 million people with relief and over 300,000 with nutrition support – but famine is now an imminent reality unless immediate and drastic action is taken.

With the country gripped by a devastating drought and forecasts of an unprecedented fifth consecutive failed rainy season, famine is now projected in several districts of the Bay region of Somalia from October to December, unless resources can be secured to sustain and expand the scale-up of humanitarian assistance.

“We know from experience that we cannot wait for a formal declaration of famine to act. Even before we first warned of the risk of famine, we were working to scale up our life-saving support in Somalia as far as resources have allowed. Since April, we have more than doubled the number of people we are supporting with humanitarian assistance, reaching record numbers in Somalia,” said Margot van der Velden, WFP Director of Emergencies, speaking from Mogadishu. ”But the drought crisis is still deteriorating and famine is closer than ever. The world must respond now, while we still have a chance to prevent catastrophe.”

Somalia. Ayan (25) with her daughter Mushtaq (15 months) in the waiting area of the WFP funded Kabasa MAM Health Center

In cover photo, Ayan waits with her daughter Mushtaq at the Kabasa Health Center. They are there to receive there for Mushtaq to be checked and for their next allowance of nutritional supplements.

Ayan was four months pregnant when she left her home with her small daughter Mushtaq and her husband. Fleeing both Al Shabaab and the unrelenting drought that had killed all their livestock, the young family walked for around a month to find food, water and safety in Dolow, Somalia.

The journey to safety was dangerous and debilitating – fear, hunger and thirst drove them to walk day and night – and it nearly killed them all. On arrival, both Ayan and Mushtaq were severely malnourished. Ayan’s husband died shortly after arrival.

In Dolow, Community Health Workers screened Ayan and Mushtaq and referred them for urgent support. Mushtaq was admitted as an inpatient in the UNICEF funded SAM clinic and finally, around a month later, she had recovered enough to leave. From the SAM clinic she was referred to the WFP funded MAM programme and she’ll be monitored and supplied with nutritional peanut paste every 15 days to ensure she doesn’t relapse.

Her mother Ayan, now six months pregnant, has been referred for antenatal care and will receive super cereal as part of WFP’s supplementary feeding programme.

Ayan said: “Life is very hard here. We all need help here. We need assistance with food, shelter and water. The drought has made life even harder.”