Claire Dangalan sheds light on the issue of the "glass cliff" beyond the glass ceilings that impede women's professional growth. 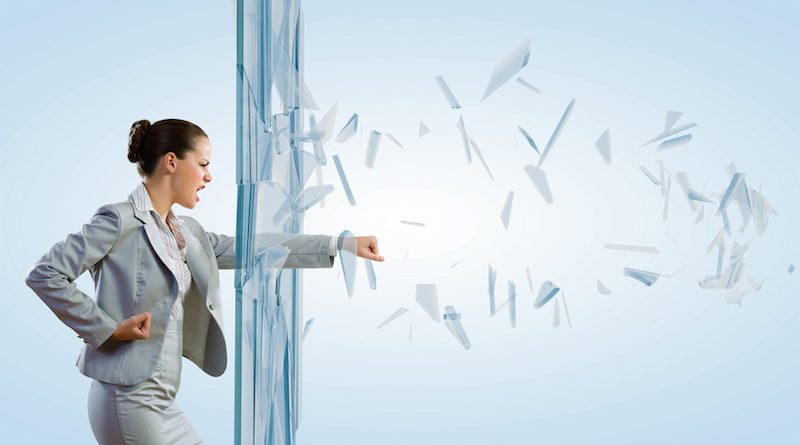 We have all heard of the proverbial “glass ceiling” which is a term coined by Katherine Lawrence and Maryann Schreiber of Hewlett-Packard in 1979 at the National Press Club during a discussion at the Conference of the Women’s Institute for Freedom of the Press.

The glass ceiling refers to a perceived barrier in the corporate world and other institutions, which, according to David A. Cotter, Joan M. Hermsen, Seth Ovadia and Reeve Vanneman, in their study “The Glass Ceiling Effect” (1999), “implies that gender (or other) disadvantages become worse later in a person’s career.” This means that all work-related factors being equal, gender and/or racial differences block some people (e.g. women in general or African-American women as a specific segment) from being promoted to higher leadership positions; and the glass ceiling becomes more pronounced as one advances up the corporate ladder. As a glass ceiling, those who are blocked from reaching the higher rungs of position and power “see (it) but don’t get there.”

But the glass ceiling has been somewhat worn and broken down though still perceivable in some instances. Women have risen to higher leadership positions in both government and private institutions, while some have ventured into startups that have been able to successfully ride the first waves of financial instability that afflict all new businesses, establishing themselves as self-made entrepreneurs heading companies and managing firms.

And then, comes the “glass cliff.”

Women are “seen to be good people managers and can take the blame for organizational failure.” However, such so-called failures negatively impact the concerned woman leader’s future career prospects, and may also threaten future opportunities for women leaders to be chosen to head the business or organization.

The first research delving into the glass cliff phenomenon was conducted by Dr. Michelle Ryan and Prof. Alex Haslam of the University of Exeter. In their study, Ryan and Haslam examined the Top 100 companies listed in the London Stock Exchange with a special focus on when they appoint women to their executive boards. The findings of the study revealed a pattern whereby companies appeared highly likely to select women leaders to head their company during downturns or periods of poor performance.

Some people might think getting appointed CEO, especially for women, even in a failing company, is well-worth a try. Definitely. But what happens next?

To be fair, in further glass cliff studies, it was revealed that participants usually chose a woman leader to take over a troubled company as qualities like good communication skills, optimism, intuitiveness, the ability to inspire others, etc., were essential in being able to successfully navigate troubled waters – part of the think crisis-think female (TCTF) pattern observed in both business and politics. The think manager-think male (TMTM) pattern, on the other hand, has something to do with how predominantly male-associated characteristics such as competitiveness and self-confidence are perceived to be highly desirable qualities in a manager, in general.

In addition, if the company in question has a history of being led by males, and if a male is responsible for having led the firm to unstable ground, then a change in leadership may also require a change in the gender of the leader. This, again, leads us to the question: what happens next?

If the change in leadership leads to a successful outcome, then all will be well and good. The trouble here is that once the company is successfully maneuvered into the post-crisis stage, surviving a period of financial instability and operational turmoil, the leader may then be criticized for not being able to grow the company after the worst is over. This can, again, lead to the appointment of a new male leader which leads us to the term “savior effect.” However, if the now-female-headed company remains in crisis mode and ultimately, she (the new CEO, GM, etc.) fails, she can simply take the fall.

Women are “seen to be good people managers and can take the blame for organizational failure” (Ryan, Haslam, et al). However, such so-called failures negatively impact the concerned woman leader’s future career prospects, and may also threaten future opportunities for women leaders to be chosen to head the business or organization.

In Marcie Bianco’s article “Women, Forget Ceilings – Beware of the Glass Cliff” (2015), she mentions similar situations taking place in the media citing executives such as Jill Abramson of the New York Times, Katie Couric of CBS and Diane Sawyer at ABC World News as having become more prominent when their companies were going through some tough times.

The glass cliff has also been observed in law firms where tough cases in which the risk of losing was high usually got assigned to female lawyers; while more “neutral” cases were less gender-specific. In parliament or congress, hard-to-win seats usually have to be won by women.

So the cause of women has moved forward, but not fast enough.

The glass cliff is there, for either men or women. But, as it happens, more women are made to face the possibility of falling off the cliff. One saving grace would be historically women-led firms where glass cliff situations such as these seem all but absent; the thing is, such establishments are still few and far between.

Men now ride the so-called “glass escalator” where traditionally female-dominated jobs like nursing and teaching have been successfully penetrated by men, which is all well and good. However, the glass escalator leads men all the way to the top where a disproportionately larger number of men lead, either as principals, deans or university presidents, or nurse managers as the case maybe. This phenomenon is quite recent and is still undergoing further studies.

The glass cliff is there, for either men or women. But, as it happens, more women are made to face the possibility of falling off the cliff. One saving grace would be historically women-led firms where glass cliff situations such as these seem all but absent; the thing is, such establishments are still few and far between.

It’s really not a matter of who’s leading who right now. Man or woman, it doesn’t really matter.

What we need is a change of mindset.

We need to see beyond the clothes, shoes and makeup, or the wheels, suit and tie.

A leader is a leader, and requires tenacity, integrity, experience and substance, in times of success and failure.

Male, female… that is secondary.

And in the ideal world we all long for, it shouldn’t even matter.

Claire Dangalan is a Filipina freelance feature writer (a.k.a. Lovely Claire Cachuela) and Features Editor of ANANKE based in Dubai. She is a consummate lover of the arts, especially literature. She taught Cultural Anthropology, Sociology, Humanities and Literature back in the Philippines. Her interests, aside from writing, include the environment, health and fitness, culinary arts, social issues / social justice, studies on world view, and “unprofessional photography.”