Melanie Bublyk reflects on the impact and repercussions of gross violations of human rights in the form of modern age slavery. 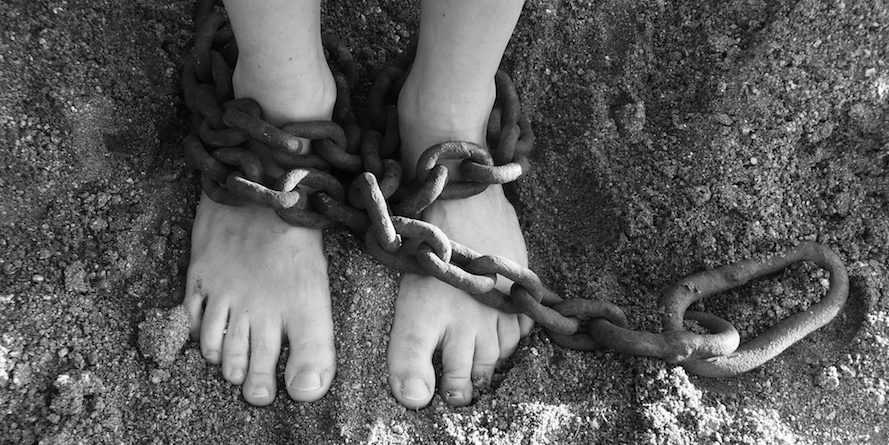 Modern slavery is an umbrella term for the serious human rights violations in the forms of (and not limited to), forced labour, domestic servitude and human trafficking.

A global affliction, it was estimated that in 2016 there were 45.8 million people employed in some form of modern slavery in 167 countries (GlobalSlaveryIndex, 2016). First world countries or those possessing relative economic stability as well as sound counter measures to combat modern slavery tend to have a much lower prevalence of modern slavery. Article four of the UN Declaration of Human Rights states that, no one shall be held in slavery or servitude and that slavery and the slave trade shall be prohibited in all their forms (UN(a), 2015). Goals 5, 8 and 16 of the Sustainable Development Goals, specifically focus on eliminating modern slavery (UN(b), 2015).

The 2016 TIP (Trafficking in Persons) report states that, there is nothing inevitable about trafficking in human beings. That conviction is where the process of change really begins: with the realization that just because a certain abuse has taken place in the past doesn’t mean that we have to tolerate that abuse in the future or that we can afford to avert our eyes. Instead, we should be asking ourselves, what if that victim of trafficking was my daughter, son, sister, or brother? (USDepartmentofState, 2016).

An International approach to addressing modern slavery is imperative because it is an issue that occurs in every country around the globe. Importantly, research and reporting gives those who succumb to the torment and injustice of modern slavery, a voice to be heard.

In countries that have weak criminal justice systems, where women and children are economically vulnerable such as Cambodia and India, sex tourism draws men from wealthier countries to these less developed countries where they can take advantage of the vulnerabilities. (US Department of State, 2016). Bangladesh, which ranks 10th out of 167 countries, has higher rates of forced labour (80%) and a much lower prevalence of forced marriage (20%) (GlobalSlaveryIndex, 2016). In the United States, sex trafficking (5,551) is more prevalent than forced labour (1,057) (TheNationalHumanTraffickingHotline, 2016). The Australian Federal Police note that, Australia is primarily a destination country for people trafficked from Asia, particularly Thailand, Korea, the Philippines and Malaysia (AFP). There are currently 4,300 victims of modern slavery in Australia. The Asia-Pacific region has the highest prevalence of modern slavery with two thirds of the estimated 45.8 million people identified as from the Asia-Pacific region. The region is the most populous of the world and spans Afghanistan in the west, to New Zealand in the south-east, to Mongolia in the north (GlobalSlaveryIndex, 2016).

When explaining or predicting the prevalence of modern slavery, global vulnerability to modern slavery is affected by a complex interaction of factors related to the presence or absence of protection and respect for rights, physical safety and security, access to the necessities of life such as food, water and health care, and patterns of migration, displacement and conflict (GlobalSlaveryIndex, 2016).

Anne Firth Murray founder of the Global Fund for Women, argues that trafficking is in part a consequence of inequities stemming from capitalism and globalisation, that said, it is possible that, working together, women and men can employ some of the benefits of globalisation, instantaneous communication, the uninhibited flow of knowledge and ideas, and major upgrades in the technological infrastructure, to prevent modern slavery.

Together, governments, civil society organizations, and companies must collaborate and work together, developing awareness campaigns that have clear objectives and measurable outcomes, training and educating employees as well as relevant partners, promote sound anti-trafficking policies and secure reporting mechanisms.

Anne Firth Murray founder of the Global Fund for Women, argues that trafficking is in part a consequence of inequities stemming from capitalism and globalisation, that said, it is possible that, working together, women and men can employ some of the benefits of globalisation, instantaneous communication, the uninhibited flow of knowledge and ideas, and major upgrades in the technological infrastructure, to prevent modern slavery.

Globalisation of communications is helping women and also men to mobilise and unite across transnational borders and work together for human rights and justice (Murray, 2013). Modern slavery is a deeply challenging issue that bears burden on every nation and it is extreme exploitation of human life. Stories and images that highlight the indignity of modern slavery are hard to comprehend. The confrontation of the cruelty of modern day slavery can serve as a driver toward change and ending the deeply entrenched global practice. The end goal must be to ensure victims of this crime are treated with compassion and fairness and that their human rights are upheld.