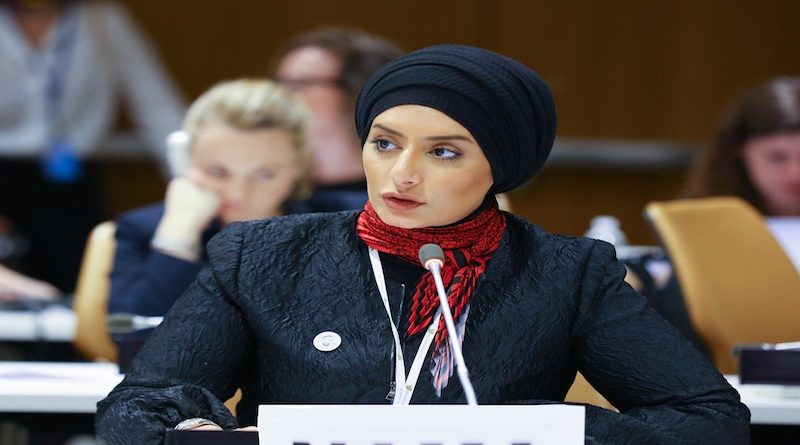 Oct 2nd, 2018, New York (USA): NAMA Women Advancement Establishment called on different international institutions, organisations and entities to collaborate on establishing a unified international platform to collect reliable data and evidence-based research on the state of women in the economy and their level of participation in labour markets globally.

NAMA underscored that the platform would create a practical reference point for efforts aimed at advancing women in the economy, and significantly help inform future strategies, initiatives, and methods of empowerment in line with the Sustainable Development Goals 2030.

The call came by Reem BinKaram, Director of NAMA Women Advancement Establishment, during NAMA’s participation at the 73rd United Nations General Assembly meetings in New York, under the patronage and directives of Wife of His Highness Ruler of Sharjah.

BinKaram also announced that the second edition of the Women’s Economic Empowerment Global Summit (WEEGS), whose inaugural edition was organised by NAMA in 2017, will be held in the last quarter of 2019 in collaboration with UN Women.

3.5% of the region’s enterprises are women-owned, compared to 14% globally

Women form 16% of the region’s workforce, compared to 33% globally

BinKaram underlined that the international platform should collect, analyse, and present reliable facts and data about the state of women in the economy, which will fulfil an essential first step, regionally and globally, in the conceptualising of strategies, policies, and programmes for women’s excellence in the economy.

She added that the biggest challenge facing women’s economic advancement is the lack of updated and holistic evidence-based research and data that explains women’s low level of participation in many sectors.

The Director of NAMA pointed out that many international and regional organisations prepare their own studies and reports on the economic status of women, including challenges and opportunities faced, clarifying that what NAMA is calling upon is the establishment of an integrated platform governed by specific criteria and frameworks that cover all the life aspects that affect women’s economic empowerment, such as the educational, professional, health, financial and administrative know-how, community awareness, and work environment aspects. 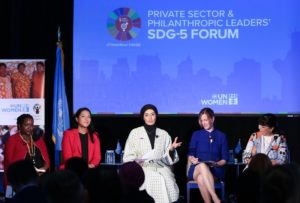 The international platform would integrate all these aspects into its data collection and studies, providing a well-rounded analysis. Thus, contributing to planning developmental strategies and sharing them with the world to benefit and learn from existing case studies.

Reem Bin Karam stressed that this international data platform cannot be realised without a holistic approach to the state of women, especially in countries where they face significant challenges related to health care, education, discrimination, and others that require governments and international organisations to rely on evidence-based studies to address these issues and establish a stable structure for women in order to mitigate and leverage their economic situation.

She added that NAMA’s role in calling for the establishment of such platform comes in line with Emirati efforts towards women’s advancement on the regional and international levels, led by the ‘Mother of the Nation’, Her Highness Sheikha Fatima bint Mubarak, Chairwoman of the General Women’s Union, President of the Supreme Council for Motherhood and Childhood, and Supreme Chairwoman of the Family Development Foundation.

The participants at the first edition of the Women’s Economic Empowerment Global Summit (WEEGS) emphasised that every year corporations spend trillions of dollars to purchase goods and services, but only 1% of that expenditure goes towards purchases from women-owned businesses. They pointed out that female entrepreneurs play a pivotal role in local economies, creating jobs and fostering innovations, however, statistics indicate that only 30% of SMEs are owned or managed by women at the global level.

A World Bank report anticipated an increase in growth in Middle East and North African region (MENA) from 2% in 2017 to 3.1% in 2018. However, it underscored the importance of creating enough job opportunities for millions of people entering the labour market, particularly women, in the forthcoming decades, highlighting that the current positive economic prospects present an ideal opportunity to speed up the pace of reforms aimed at unlocking the potentials of the private sector to further growth and job creation.

Reem BinKaram said: “The second edition of Women’s Economic Empowerment Global Summit (WEEGS), which will be hosted in Sharjah in the last quarter of 2019, will build upon the outputs of the Summit’s first edition, which focused on gender responsive procurement and women’s participation in global value chains, in a testament to Emirati leadership continuing the discussion to reach higher levels of women’s economic advancement globally. Through collaborating with our partners, we proved that we can be agents of positive change in the realities of women across the region and the world.”

“Women are not active in some sectors, such as logistics, marine industry and energy. There are significant opportunities in global supply chains with small enterprises being one of their key elements. These sectors offer untapped opportunities for advancing women in the labour market,” she added.

A platform for all international stakeholders to make a pledge

The first edition of the Summit featured 20 sessions delivered by 70 speakers, including senior figures, ministers, heads of local and international government organisations, experts and entrepreneurs. The Summit provided them with a platform to discuss their future visions for the economic empowerment of women in the presence of over 800 participants.

One of the main outcomes of WEEGS’ inaugural edition was the announcement of the names of companies and organisations that pledged to support “The Women’s Empowerment Principles”. Twenty local and international companies and organisations have committed themselves to adopting at least two of the eight principles identified by UN Women and the UN Global Compact (UNGC) to promote women’s economic empowerment.

The pledged actions require all those entities to review their policies and practices on women’s empowerment or develop new policies to promote gender equality in the workplace, labour market and community, as part of the collaborative efforts aimed at supporting women’s vital role in business, given that they are an indispensable human capital for social development.