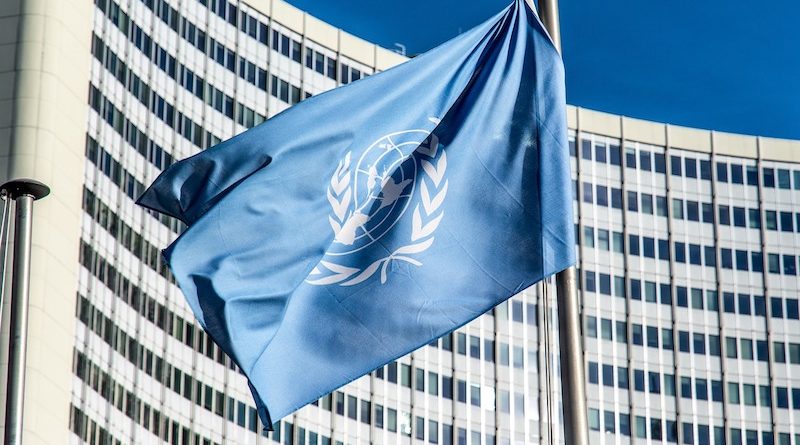 The Security Council unanimously adopted resolution 2492 on October 29th, 2019, urging States to recommit themselves to its women, peace and security agenda — now approaching its twentieth anniversary — including by creating safe environments for women leaders, peacebuilders, human rights defenders and political actors around the globe.

By terms of the resolution, the 15‑member Council encouraged Member States to fully implement all provisions of its resolutions on women, peace and security — including the initial resolution 1325 (2000).

Also by the text, the Council urged countries supporting peace processes to facilitate the full, equal and meaningful participation of women, including at the earliest stages.  It also asked States to address threats, harassment, violence and hate speech, and to remain committed to increasing the number of civilian and uniformed women in peacekeeping operations.

Delivering opening remarks, Secretary‑General António Guterres said change is coming at a pace too slow for the women and girls whose lives depend on it.  Nearly two decades after the adoption of the landmark resolution 1325 (2000), they still face exclusion from peace and political processes, as attacks against women human rights defenders increase.  Only a tiny percentage of peacebuilding aid goes to women’s organizations, he noted.  “But despite this grim litany, we will not give up,” he vowed.

Lina Ekomo, speaking for FemWise-Africa and the African Women Leaders Network, recounted the persistent efforts of women in the Central African Republic to gain inclusion in that country’s peace process.  The absence of women participating meaningfully in the process enabled perpetrators of gender‑based violence to win and hold leadership positions, she said, adding that victims of abuse have been abandoned as civilians live in fear of abduction.

Briefing members, Phumzile Mlambo-Ngcuka, Executive Director of the United Nations Entity for Gender Equality and the Empowerment of Women (UN‑Women), declared:  “Progress is too slow, political will is not strong enough and pushback against the needs and interests of women is threatening the progress made.”  Calling upon States to heed the calls of women and close the gaps between their words and actions, she said violent misogyny is on the rise and political violence is targeting women at record levels, as sexual violence remains a weapon of war and terror.  Meanwhile, “we still live in a world that tolerates and excuses women’s continued exclusion from peace and political processes and institutions,” she said.

Bineta Diop, Special Envoy of the Chairperson of the African Union Commission on Women, Peace and Security, pointed out that violence against women continues unabated and includes the use of women and girls as suicide bombers, as seen in the Sahel and Lake Chad Basin regions.  Outlining the crucial mediation role being played by women on the continent, she said the Network of African Women in Conflict Prevention and Mediation — commonly known as FemWise‑Africa — was established for that purpose.

Alaa Salah of the NGO Working Group on Women, Peace and Security spotlighted women’s important role in her native Sudan — including their opposition to colonial rule and their recent struggle against the dictatorship of former President Omar al‑Bashir — while pointing out that women have largely been sidelined from the formal political process in the months following the revolution.  Accounting for 70 per cent of Sudan’s most recent protests, women were teargassed, threatened, assaulted and jailed without charge or due process, she recalled.

Lina Ekomo, speaking for FemWise-Africa and the African Women Leaders Network, recounted the persistent efforts of women in the Central African Republic to gain inclusion in that country’s peace process.  The absence of women participating meaningfully in the process enabled perpetrators of gender‑based violence to win and hold leadership positions, she said, adding that victims of abuse have been abandoned as civilians live in fear of abduction.  She called for women to participate in the 2020 and 2021 elections and for the routing of aid through civil society groups rather than unreliable institutions.

Speaking after the resolution’s adoption, the representative of the United States noted that the resolution refers to previous Council texts containing references to sexual and reproductive health and rights, as well as to the safe termination of pregnancy, which the United States cannot support.  The text also falls short of throwing the Council’s full weight behind those women putting their lives on the line every day as peacekeepers.

The United Kingdom’s representative, however, described the text as the “the final push” needed to advance the women, peace and security agenda.  While welcoming its focus on establishing safe spaces and increasing funding, she also expressed disappointment that its language on human rights defenders is not more ambitious, and that it was not able to better spotlight the important role of civil society.  “They are the ones on the front line and they need greater recognition and support,” she pointed out.

The Russian Federation’s representative acknowledged the need for National Action Plans, while emphasizing that adopting them merely to satisfy reporting requirements does not provide an assessment of national actions.  He went on to stress that women themselves must participate at all levels of peacemaking in order to make real change.  He also pointed out the text’s focus on human rights, underlining that such questions are the purview of other organs.

Poland’s representative said new tracking confirms that women’s participation in peace talks is not increasing fast enough.  Among other things, she said, women are often viewed as more honest brokers, are more likely to advocate for accountability and services for survivors of sexual and gender‑based violence and are well‑placed to detect early signs of radicalization.

Jordan’s representative said that, although men have long been considered the only relevant actors in armed conflict and in conflict resolution, women are greatly affected and involved as relatives, caretakers, politicians, human rights defenders and combatants.  Their engagement must be enhanced, not only in “soft” preventive diplomacy, but also at the core of peace processes, she stressed.

Namibia’s representative was among delegates who cited statistics revealing that peace agreements that women are involved in negotiating are 35 per cent more likely to last for at least 15 years.  “This number alone should encourage parties to ensure that women must be part of the conversation,” he said, adding that Namibian women are among personnel deployed to three major United Nations peace operations in Africa.

Naledi Pandor, South Africa’s Minister for International Relations and Cooperation, and Council President for October, spoke in her national capacity, saying the high percentage of women in her country’s national defence force has enabled it to deploy more women to the front lines of conflict as a troop contributor.  However, women’s participation in peace processes continues to be undermined, she said, emphasizing the critical need to increase their involvement in both uniformed and civilian components of peacekeeping operations, invest in women as peacebuilders, protect their human rights and advance accountability for heinous crimes such as sexual violence.

France’s representative noted that recent erosions, as well as an unacceptable questioning of women’s rights, have cast doubt on the progress of the women, peace and security agenda.  He described the resolution adopted (ed: on October 29th, 2019) as an opportunity to press forward rather than simply “treading water” on the rights of women.

Also speaking were Cabinet Ministers from Germany (also on behalf of the Group of Friends of the African Women’s Leaders Network), Norway (on behalf of the Nordic countries), Sweden, Guatemala, Liberia and the Republic of Korea.

Image by Edgar Winkler from Pixabay

Sowing seeds for a sustainable future