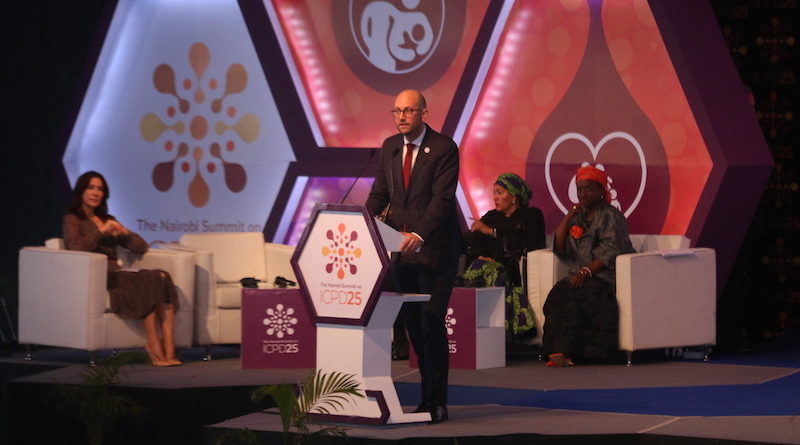 The commitments are being made during the three-day Nairobi Summit on ICPD25, taking place 25 years after the landmark International Conference on Population and Development, in Cairo, where 179 governments adopted an action plan for women’s empowerment and sexual and reproductive health for all.

“Since the Cairo ICPD, we have put women and girls at the center of global development. This has paid off time and again. That ICPD vision is still far from reality, and that journey that began 25 years ago in Cairo is far from over,” UNFPA Executive Director Dr. Natalia Kanem said at the start of the summit. “It’s now time to finish that unfinished business.”

Since the International Conference on Population and Development, or ICPD, gains have been made in strengthening maternal health care and expanding access to quality contraceptive information and services. But there are still many who have not benefited from these gains, with more than 800 women dying during pregnancy and childbirth every day and 232 million women wanting to prevent pregnancy but not using a modern contraceptive.

The summit aims to tackle these problems as well as put a stop to gender-based violence, child marriage and female genital mutilation.

“The bold, rights-based vision of the ICPD – that development must put people first, that attention must be paid to strengthening equal access to health, education, and human dignity for all persons – anticipated the bold, ambitious vision of the 2030 Agenda,” said United Nations Deputy Secretary-General Amina Mohammed. “As critical accelerators for the Sustainable Development Goals, the outcomes of ICPD must be carried forward. The success of the global agenda for sustainable development, our common framework for people, planet, prosperity, peace and partnership, depends on it.”

“Among Kenya’s many commitments are actions to accelerate equality, equitable access and availability of reproductive health service for women and girls,” said Kenya’s Principal Secretary to the Ministry of Foreign Affairs Macharia Kamau.

“We will continue to be among the major donors in the world in support of the ICPD Agenda: in particular of women and girls’ sexual and reproductive health and rights,” said Denmark’s Minister for Development Cooperation Rasmus Prehn. “Denmark will continue to work at the very front together with partners. If we want to reach the 2030 agenda, we must fulfill the promise of Cairo.”

About the Nairobi Summit

The governments of Kenya and Denmark, and UNFPA, the United Nations sexual and reproductive health agency, have organized this high-level political summit, from 12-14 November 2019. The Nairobi Summit on ICPD25 aims to mobilize the political will and financial commitments we urgently need to finally and fully implement the Programme of Action agreed to by 179 governments in 1994 at the International Conference on Population and Development (ICPD), and confirmed unanimously in a political declaration in 2019.