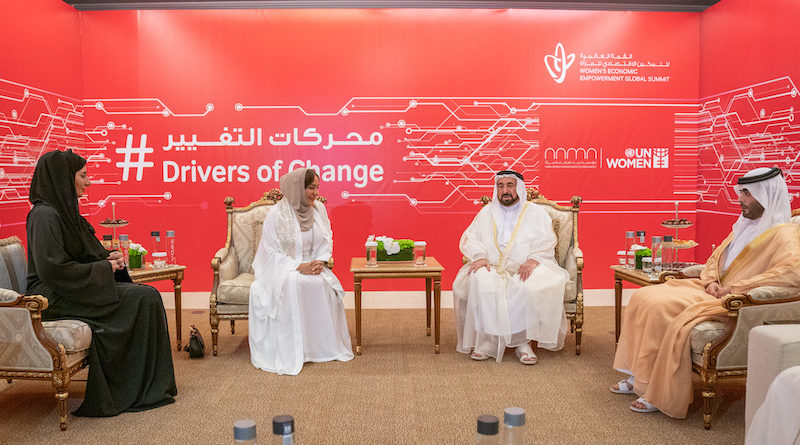 December 10th, 2019, Sharjah (UAE): His Highness Sheikh Dr. Sultan bin Muhammad Al Qasimi, Member of the Supreme Council and Ruler of Sharjah, has asserted that he will personally support programmes and efforts to empower women around the world, particularly in Africa, Asia and Latin America. The Sharjah Ruler also called on entities across Sharjah to expand their initiatives to include all communities worldwide where women need support to be educated, trained and participate in the economy. 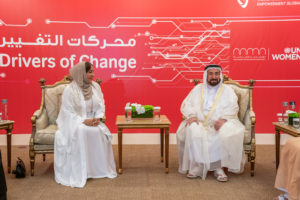 These statements came during the opening ceremony of the second Women’s Economic Empowerment Global Summit (WEEGS 2019) in Sharjah today (Tuesday) where His Highness Sheikh Dr. Sultan Al Qasimi took the pledge before the summit’s 1,000-plus participants.

WEEGS 2019 opened in the presence of several high-ranking government and semi-government officials in the UAE, leading UN representatives, women’s empowerment advocates, business leaders, and decision makers. The two-day summit is organised by the NAMA Women Advancement Establishment (NAMA) and United Nations Entity for Gender Equality and the Empowerment of Women (UN Women). The two-day event themed ‘Drivers of Change’ is being held under the patronage of Her Highness Sheikha Jawaher bint Mohammed Al Qasimi, Chairperson of NAMA.

Welcoming all attendees to the summit, which will be shining light on diverse international perspectives on the effective inclusion of women in economy, the Sharjah Ruler said: “Women are mothers, wives, sisters, peacemakers, successful professionals. They are equal partners in all walks of life; they share the same experiences as their male counterparts and should therefore never be at a position of disadvantage. This is our vision, and to achieve it all of us – men and women – must embed the principles of equity and partnership in our homes and within our values of upbringing. By doing so, we will create young advocates of social justice and gender parity who will engage with society and at the workplace in the right way and create a vibrant and continuous culture that upholds these noble principles”.

“The theme of this conference ‘Drivers of Change’ warrants it global relevance. The 17 organisations who took the NAMA Pledge during WEEGS 2017 to enforce specific initiatives to enhance women’s contributions within workplace and society are living examples of drivers bringing about effective change. The benefits of their efforts, however, did not leave their premises in Sharjah and I believe that this summit has brought us together again to create global impact. In several countries, women’s realities could be significantly improved with strong direction and financial support. Thus, on behalf of WEEGS and Sharjah, I announce that I will sponsor the implementation of women’s economic empowerment programmes spearheaded not only by Sharjah-based institutions, but by entities worldwide” His Highness further added.

“We all have a responsibility to maximise the outreach of empowerment efforts worldwide, especially in places where women suffer the gravest hardships. In Asia, Africa or Latin America, for instance, a sizeable percentage of girls and women are deprived of basic health care. This is why, we must go beyond the Arab world to extend our support to women around the world where they need us the most. I hereby pledge to sponsor global efforts to support women’s economic empowerment, and particularly in Africa, Asia and Latin America, where women need us to be by their side,” the Sharjah Ruler concluded.

We strive to change this culture, which allows the 23% gender pay gap to exist

For her part, HH Reem BinKaram, Director of NAMA, said: “In Sharjah, we believe that women’s economic empowerment is synonymous with inclusive community development. This is what His Highness the Ruler of Sharjah has taught us, and what his wife, Her Highness Sheikha Jawaher bint Al Qasimi, has been promoting for decades.”

“This summit not just looks at defending women’s rights; we are all here to stimulate action towards changing the existing culture entrenched in families, societies, educational entities, governments and private corporations that allows or ignores gender inequity. Doing this will entail, first, recognising and believing in women’s capabilities, followed by stronger legislation and policies, better education and professional opportunities,” she added.

“We strive to change the culture that allows a glaring 23 percent gender pay gap to exist. We would like to change the culture that allows only 28 percent of working women around the world to have a paid maternity benefits. We seek to change the culture that forcibly orientates girls towards professions and specialisations that do not realise their ambitions or their potential. We need to make every effort to break the stifling stereotypes that severely limit the achievements of working women, and offer them the resources they need to establish the right balance between their professions and families. To attain these goals, we must assume our roles as active drivers of change,” BinKaram remarked.

“The International Labour Organization (ILO) says it will take more than 200 years to achieve gender equity and bridge the pay gap. We cannot wait that long if we aspire to succeed in both economy and society – if we were to reduce poverty, establish peace and secure a more sustainable future for generations to come”. Putting her words within an achievable context, BinKaram cited the UAE’s and Sharjah’s experience, saying: “It is not a question of time, but a question of faith, willingness, planning and continued, dedicated engagement to better women’s status.”

NAMA and UN Women are working together to promote gender equality

In a recorded message screened during the event, HE Phumzile Mlambo-Ngcuka, United Nations Under-Secretary-General and Executive Director of UN Women, expressed her appreciation to His Highness Sheikh Dr. Sultan Al Qasimi, and his wife, Her Highness Sheikha Jawaher Al Qasimi, for their unstinting support to furthering women’s empowerment locally and globally.

These efforts, she said, emphasised that gender equity and women’s empowerment are a national priority for the UAE. Phumzile also lauded the progress made by the NAMA – UN Women partnership in implementing the latter’s flagship programme ‘Stimulating Equal Opportunities for Women Entrepreneurs’ globally, with special focus on promoting gender-responsive procurement, increasing female entrepreneurs’ access to skills and finance, targeting 25,000 women in South Africa.

“Governments and corporations worldwide spend trillions of dollars acquiring goods and services annually, and purchases made from women-owned businesses account for only 1 percent of all these procurement contracts. If we could increase this by just one more percent, that will mean at least
US$ 60 – 70 more worth of goods and services procured from women-owned businesses. NAMA and UN Women are working together to promote gender equality, and I hope that the summit emphasises the importance of celebrating differences, and brings together diverse experiences onto one path of justice and equity,” she added.

Her Excellency Khetsiwe Dlamini, Chief of Staff, UN Women, said: “WEEGS 2019 has been aptly titled, ‘Drivers of Change’, as women are also in the driver’s seat of this future that we say we want. The future that the Agenda 2030 describes as being peaceful with no war, as being prosperous with no poverty, and a lasting planet that not only hosts our generation, but generations to come. NAMA, I believe, means continuous growth, and it is so appropriate to put women front and centre as NAMA does. When women grow, families grow. When families grow, nations grow. When nations grow, the world grows. Women are at the heart of all meaningful and sustainable progress.”

I am glad we are all here at this summit to give birth to this new world where all women will be empowered,” she added, highlighting that the UAE is a Gulf Region leader when it comes to establishing gender equality as a norm. “The UAE boasts 70 percent of its graduates as women. This is unheard of, and the starting point of any progress, we know, is education. Women make up 50 percent space sector employees and 25 percent cabinet ministers in the UAE. Women-owned businesses contribute over 10 percent to the national economy.”

Mentioning the importance of gender-responsive procurement as a driver of women’s economic empowerment, Dlamini emphasised, “We are proud to be partnered with NAMA to make sure that women get a share of business from governments and private businesses.”

A video encapsulating the achievements of 17 local and international organisations who took the NAMA Pledge during WEEGS 2017, adopting and implementing at least two of the eight Women’s Empowerment Principles (WEPs), set by the UN Women and the UN Global Compact, to ensure women’s economic empowerment.  The opening ceremony concluded with the Sharjah Ruler honouring these organisations for the progress they have made over the past two years in successfully reviewing their practices and developing new policies to achieve women’s empowerment, supporting women’s access to senior management positions based on gender equity, enhancing their opportunities for learning, training and professional development.

Leadership lessons from businesswomen at WEEGS 2019