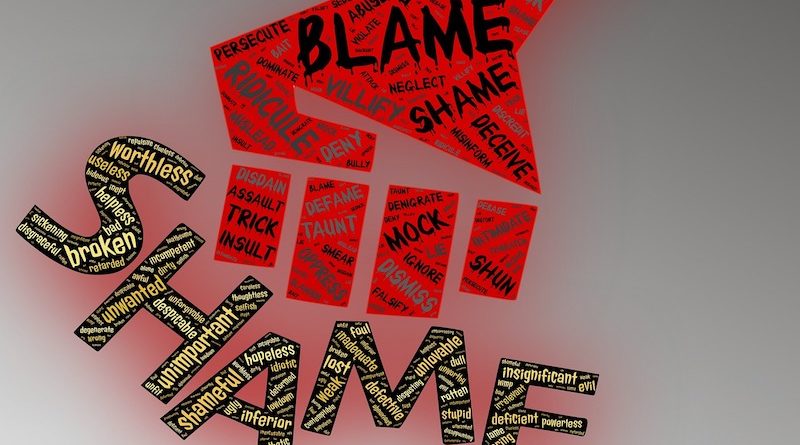 Tell us about the organization; what was the main idea behind its launch?

TAP Africa is a teens-focused initiative that aims to help raise a generation of youths, who are aware of the challenges affecting their communities and are eager to create sustainable solutions. Through our work, we engage teens in learning and addressing social challenges in Kenya, such as Gender Based Violence and Youth Unemployment, thereby helping raise a generation of proactive young people to lead positive change in their communities. Our #EndViolence campaigns aim to equip teenagers with life skills, knowledge about Gender Based Violence, as well as art skills necessary for helping teens contribute towards ending violence. 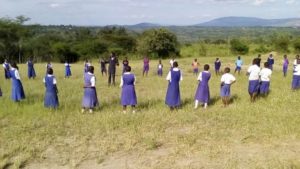 Patrick engaging teens in Machakos (One of the Regions highly ranked for having most GBV cases).

Our campaigns were informed by our interactions with teens at TAP Africa, where we realized that most of them were affected by Gender Based Violence, where they had either directly or indirectly witnessed violence #BehindClosedDoors, yet they had never gotten a platform to speak about it; as a result, many of them suffered effects like trauma evidenced by poor performance, withdrawal, violence in school, lack of concentration, and mistrust, among others.

This program, which has existed since 2016, aims to equip girls and boys with knowledge about GBV while giving them some of the skills necessary to champion positive change. During this time, we have engaged various partners; VSO/ICS Alumni, Redcross chapters, A Grain of Rice Project, Moonlight Academy, LOHYI, as well as various schools and churches in Nairobi’s shanties, Mombasa, Kirinyaga, Kiambu, Kajiado, and Machakos. 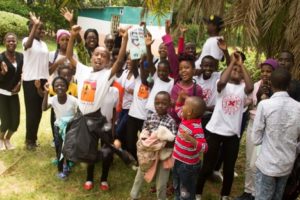 What do you aim to achieve through this initiative?  Through the Teens Voices Against Violence project, we aim to help teens break their silence on violence, that mostly happens in their homes, so that primary actors, adults, caregivers, duty bearers, would listen and do something to stop violence. We also hope that by engaging teens in learning about Forms of Violence, Gender Stereotypes, Roles, and Discrimination, Effects of Violence, Red signs of Violence, and developing Respectful relationships, they shall help prevent violence in their lives, both now and in future. Our activities also involve “Voicing out” about effects of violence, especially on children, through various forms of art such as poems, songs, pictures, spoken word, dance among others. All these pieces, are then compiled into a documentary which will be shared and watched on various platforms. 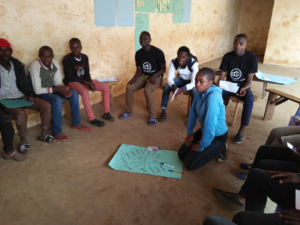 A group of teens in Kibera learn about the Forms of Violence.

In the long run, we hope that through our efforts, we shall have helped these boys and girls, to understand violence and its root causes, as well as to resist and prevent it. Children are central in transforming societies, because they are still at their formative stages. The environments we raise them up in, the information and actions we expose them to now, very much inform the kind of behaviours they shall manifest in future as adults…and the cycle shall continue, because they do not know better. As agents of change, we want to break the cycle of violence in future. Besides, by giving them a “Voice” now, we are gradually planting the seed of social change-making in them.

Can you give some statistics regarding GBV especially in your region?

First of all, GBV is very common in our country, so much that when a group of teens in Kibera Slum were given a random activity, by our team, to write what they did not like about families, each of the 25 teens wrote Violence among other things! When the same question was rephrased and teens were asked to draw the kind of families and communities they would want to have in future, most of them drew blossoming flowers, and explained that they represented peace and serenity. 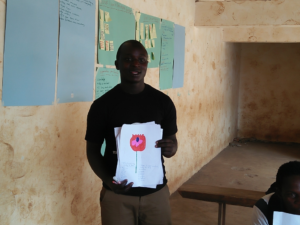 This is a strong indicator, that almost every child here has witnessed violence, either directly or indirectly (Note: During these sessions, our topic of ending violence was totally undisclosed). It is heartbreaking!

The other strong pointer to how GBV is rampant in various communities, is how teens readily narrate stories of various incidents of violence, witnessed in the neighborhood and at home. All teens are able to relate to the topic, and narrate various incidents of domestic violence, sexual violence, among others, vividly. While some are usually shy in the first days, they end up disclosing very painful stories of their experiences in homes and neighborhoods where violence knows no barrier.

This is true because, according to statistics from the Gender Violence Recovery Centre (GVRC) in Kenya;

While this “Darkness” (as Mary, a teenager in Kibera termed violence) is quite dark in each of our lives, there is a lot of hope for lighting it up, because throughout our sessions, participants usually have ‘A-ha’ moments, when they discover how violence starts and how they can prevent it. It is so encouraging for us when various teens boldly step up and commit to do something about stopping violence, especially engaging their parents and protecting their siblings and friends.

Are there any policies to protect victims of GBV especially in your region?

Over the last decade, Kenya has been successful in enacting laws and designing policies to fight Sexual and Gender based Violence (S/GBV). The Constitution of Kenya recognizes GBV as a violation of human rights. Article 28 stipulates that:

“Every person has inherent dignity and the right to have that dignity respected”, and article 29 (c) stipulates that “Every person has the right to freedom and security of the person, which includes the right not to be subjected to any form of violence from either public or private sources (domestic violence).” This is in addition to The Sexual Offences Act 2006 and the ratified Protocol to the African Charter on Human and People’s Rights on the Rights of Women in Africa (Maputo Protocol.), as well as many other ratified international conventions.

While this is the case, lots of GBV cases go unreported and little or no action is taken upon the few reported ones. Most alarming, however, is the deafening Silence, Ignorance, or lack of Awareness on the harmful effects of violence on Children.                  What kinds of policies are needed and what needs to be done to properly implement good policies?

First, as an initiative whose primary focus is teens, we believe that a clear Policy that aims to protect children from living in and witnessing violence at home, is a major priority. We believe that, no parent would want their child to be taken into custody by the government, hence, every adult, would try to avoid, prevent, or report cases of violence. We must, as a society, endeavor to provide a supportive and peaceful environment for our children and young adults, to grow up in, utilize their diverse gifts, and become the very best versions of themselves.

Second, all our policies aimed at helping end violence, should be matched with adequate training and resources to ensure effective implementation.  The government should also take an active role of sensitizing the people, government departments, and the judiciary, about the various policies that exist, without entirely leaving this important task to civil societies.

Finally, various institutions and initiatives working to end GBV should join hands and harmonize their efforts in order to ensure that this issue is thoroughly tackled without leaving various important aspects, such as “children in violent homes” unattended to. Besides, together, we can all help increase overall public awareness about GBV.

What is your strategy for your initiative? 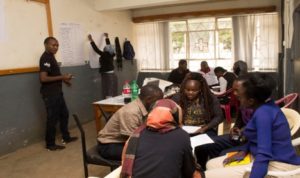 Joseph Gathura and Susan Waruingi lead a session for facilitators in Machakos.

We reach out to thousands of Kenyan teens, creatively engage them in learning about various aspects of GBV, as well as Voicing out through art pieces, in order to create more awareness among their peers and caregivers. From Nairobi, Machakos, Kirinyaga, Kiambu, Kajiado, and Mombasa, we engage teens in schools, churches, and other community based organizations and groups, in sessions that cover gender stereotypes, roles, and discrimination, identifying warning signs, forms of GBV, prevention, developing respectful relationships, supporting affected friends, using art to raise awareness, as well as taking initiative to champion the change in their communities.

Our hope is that they shall not only be able to cope today, but also help break the cycle of violence in future and grow holistically, into responsible adults.

Racing into a new era